This wiki page documents the Marconi Easter Egg that is hidden in Battlefield 1. The Google doc used to populate this wiki page can be found here. Currently, the primary solving hub for this ARG is the Battlefield Easter Egg community, who have a wiki here and a YouTube channel as well. A full video explanation of the Easter egg can be found here.

On February 14, the Morse code changed again, to the following message:

Each user hears a different location name; locations are randomly assigned to players. Additionally, APREMONT must be swapped with VARENNES due to an error on the developer's part. There are 27 locations total: 3 locations on each of the 9 maps. In order to advance through the Easter egg, you need to know which location you are assigned; here is a tutorial (courtesy of Dunem) to help you read your Morse code. This is the list of locations, along with their respective maps, in alphabetical order:

The first symbols discovered at each location are difficult to find; they are small double arrows pointing to the left and right, and only appear when the player comes within 0.4 meters. A player will typically need to crouch or go prone in order to be able to see their symbol. Additionally, players can only see the symbol at the location they've been "assigned" to. When examining a symbol up close, a distinct sound is played (video). Pictured below are the symbol locations that have been discovered thus far.

An L. PILL is short for lethal pill, a pill intended to be taken by soldiers to commit suicide rather than be tortured. Visiting the specified reversed location, the second location, yields a triangle symbol in place of the normal double-arrow symbol. The second symbol appears in the exact same spot that the first symbol may appear for other players.

After finding the fourth symbol, the MCOM's light colour turns transparent. This message begins with an location from the list of locations, reversed and encoded with the Railfence cipher, with 5 rails, and 0 offset. Note that the previous symbol, the fourth symbol, is in the shape of a fence, which could have been a hint. Here's the format of the message:

The fifth symbol is a pattern of broken and unbroken dashes. No meaning has been derived from this symbol as of yet. 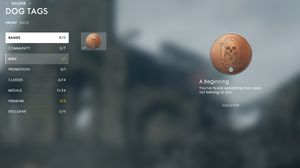 The final Morse code, once deciphered, directs the player to the balcony of a windmill on the map Giants Shadow, specifically the windmill nearest to the German spawn point. Standing on the balcony of the windmill and looking outward/slightly upwards (video) while waiting for exactly two minutes will trigger a courier pigeon to swoop past the player. The same dramatic sound effect heard throughout the EE will play, and it is a this point that a new dogtag, pictured right, becomes available to the player. The tag is named "A Beginning", and has the description "You've found something that does not belong to you". It should be noted that a player will only be able to trigger the pigeon if their MCOM is on the cyan lights stage (stage 9) - you cannot skip the Morse Code.

In addition to the dogtag, the player's MCOM light will change again to a red color, and another Morse code message plays, but at a lower pitch than before and accompanied by eerie background noise and apparent screaming (video). The message decodes to:

The code repeats indefinitely. The meaning of MASTER MAN has yet to be determined, and the whispering/screaming noises in the background have yet to be clearly transcribed.

Edit: MASTERMAN referes to Charles Masterman, who was a brittish politician working in the propaganda departement during WW I. His initials "CM" can be found on the dogtag.