This page describes a major event in the Dawn Bloom ARG.

A member of the Q98A66 Taskforce, Diagnostic, was exposed to a foreign material during the drone attack at False Point. Some days later he suffered severe health complications.

Liaison checked in four days after the attack in False Point and gave an update on Diagnostic’s condition. He appeared to be worsening, with symptoms of severe radiation poisoning. His teeth were falling out, he was bleeding from his mouth, and his leg was not getting any better. The vet had examined him and produced a handwritten report. 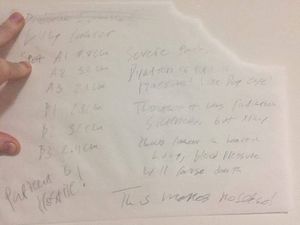 During the period of time that they were present at the vet, Diagnostic had bitten the doctor which prompted them to get kicked out of the safe house. Liaison paused in his briefing of the agents to go to the bathroom with Brain, and Diagnostic soon appeared in a voice comms channel. A couple agents that were online at the time went into comms to figure out what was up, and they encountered a Diagnostic that wasn’t at all acting like someone who was seemingly on their deathbed. During the conversation it was revealed that he had hijacked the van the team was using (leaving Liaison and Brain at a homeless shelter in New Haven, CT) and was driving to a safehouse in Brooklyn. During the course of the conversation, several changes in his condition were reported:

Ultimately based on all this information it was believed that Diagnostic had contracted some form of Lycanthropy. The running theory was that it was a curse linked to the bone shards in his leg, but because the other shards were in the possession of other individuals it was uncertain if it would be possible to counteract this curse.

Before Diagnostic had signed off, one last suggestion was given to try self-administering Aconitine, a poison that can be extracted from the Wolfsbane plant, as he said he’d have access to a centrifuge and other needed things. The hope was that he would be online for agents to assess the effects but instead, he did not come online and injected it via IV himself. This put him into intense pain and knocked him out for the night. He was not gotten in contact with again until an agent suggested to track him using the phone tracking program to find lost phones (the phone Diagnostic was using was Liaison’s).

Utilizing the program led them to the address to send mail to for Brain and allowed us to regroup Diagnostic with Liaison and Brain.