Difference between revisions of "Entropy"

In February 2018, a series of videos depicting cryptic monitors and symbols were found on a YouTube channel named 'RW50cm9weQ'. This page documents the efforts made to decipher the videos and uncover the mysteries behind the channel.

Shortly after the discovery of the channel, users quickly found that the channel name, RW50cm9weQ, was base64 which translated to Entropy. 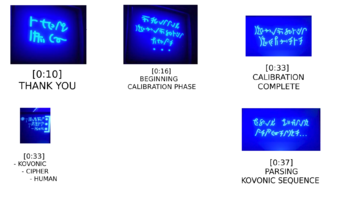 The next video was uploaded on 25 February 2018, titled Nsqazwbu, "Becoming".

The video shows a blue hallway lined with a dozen pillars on each side. The camera is facing a porthole, with a view down to an Earth-like planet. The Porthole is surrounded by four circles labeled 1,2,3,4. Top left circle (1) is pulsing.

the camera turns to the right once more, down a hallway, showing a screen labeled 1. The screen shows the following text:

This is followed by a page with numerous equations. On the right side, the symbols for the basic math operators, PI, zero, infinity, and an unidentified symbol are listed, while the bottom left shows that the entropy symbol equals 160. (The top left section, and the meaning of filled and hollow circles and broken hollow circle (o) are unknown as of yet.)

On 26 February 2018, a video message titled, Qabehfgqhwbu, "Constructing" was uploaded.

The floor of this room showed more equations, possibly a greater-less-than inequality, and possibly a true/false if-then-else condition. There were also two columns of numbers, each labeled with the (o) symbol. The letters beneath the equation read: FIND MORE. The screen flashed with a green light, before slowly fading to black.

On March 4th, 2018, a new video was uploaded to the channel. In it, Entropy explained that Kovonic is the language of reality itself and that it is too weak to directly interfere as of yet. Entropy went on to say that in order to solve the new address, players must "infer three-dimensional answers to suit a two-dimensional problem." 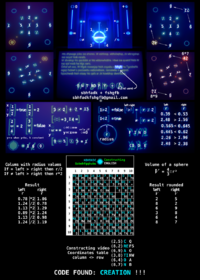 When these coordinate pairs were applied to the grid of Kovonic symbols in "Constructing," players were able to spell out the word Creation. By encrypting the address, players received the email [email protected]. Players received an instant response in X6I:

This page is a work in progress and will be updated as the ARG progresses.