This page describes in detail the events of Chapter 4 in the Entropy ARG.

At an unknown time prior to April 27th, 2018, the Eyes of Entropy app changed to replace the tri-grid with the Primoda symbol surrounded by a rotating circle. 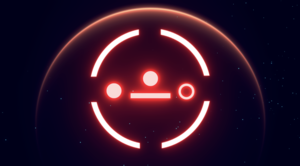 The Primoda symbol remained displayed in The Eyes of Entropy app for approximately 9 hours.

Players assumed they were once again communicating with the entity known as K.

Players became confused. K was the only name the entity had ever disclosed. The EoE app then soon displayed. 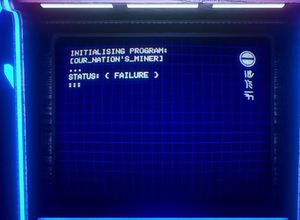 The EoE app quickly changed to display an animated circular Host symbol. The symbol remained until shortly before or on June 7, 2018.

On June 4, 2018, Curtis announced to Discord the official re-launch of Our Nation's Miner (ONM) on Steam. The game experience begins by asking players to flip 1 of 2 red and blue switches. The game narrative then follows the "Blue Path" or the "Red Path" depending on which switch the player chooses. Players can reset the switch choice by entering 1382556791 (using the blue buttons on the cabinet, left to right being 1 to 9)

As players progress on the selected path, the game displays dialogue after each game level, called Arenas.

After the release of the game, Kyren then appeared on the Eyes of Entropy program again. They gave some vague explanations about what was coming up, and expressed a sense of superiority by stating how predictable they believed Entropy was. They claimed to know that Entropy had discovered something in their core regarding the missing crew member: Oscar Butcher. During the chat, Entropy tweeted out an image with the caption "I've found something" encoded in X6I.

The first major update to Our Nation's Miner was released on June 8th, 2018, and was titled "Mutation 1". The changelog for the game read as follows: 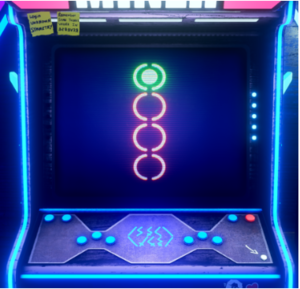 When the code given by Kyren was input on the buttons on the in-game game cabinet, a screen appeared with what appeared to be 4 empty brackets. It was discovered that in order to fill the brackets, the players would need to enter 4 codes into the cabinet. These codes were found by looking at the leaderboard that appeared momentarily in the game's official trailer.

However, players discovered that the codes didn't quite match up. Since there was no button on the cabinet that represented 0 (only 1-9), the codes would have to be modified in order to be input. Players then remembered that one of Kyren's hints was that "something can come from nothing 'ex nihilo'", and replaced all 0's in codes with 1's. This gave the correct code for each key, as follows:

Entering a correct code filled in one of the brackets. Once all four codes were input and all four brackets were entered, players were given access to the Virtual Dev Console in-game. The Virtual Dev Console had two switches, one for Byte-Net Authority and the other for showing Fragmented Data. Both switches could be set to TRUE.

Once the Fragmented Archives were unlocked, new information was given. Four QR codes were given on each page of the Archives, which each linked to a different page on the Lord Bytesworth website. The links are as follows:

After switching on the Fragmented Archives on a complete save file, the in-game control panel changed. It gained a new feature titled "Anti-Symmetry", which had no known purpose at the time.

The second major update to Our Nation's Miner released on June 21st, 2018, and was titled "Mutation 2". The new changelog read as follows: 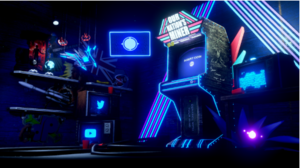 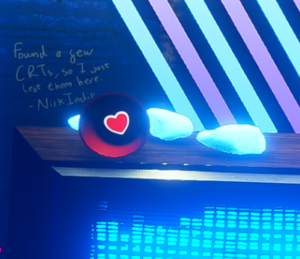 Upon the release of this update, the Eyes of Entropy program changed to show a new message: "Mirrored - Some things work in reverse." Players then discovered that once a save-game had reached the traditional 'end' of the game, it would reset and show a new menu. This new menu had new decorations and features both on and around the arcade cabinet, including:

In addition, upon entering the game, the entry screen changed from saying "Somewhere in London, 1984" to "[UNKNOWN].PE, LOCATION: [UNKNOWN]". Players recognized that the only other place that ".PE" has been used is when referring to dates in the Prime verse. An example of this is in the crew logs on the Starship Sonder, which had been provided with a numerical year with the suffix ".PE".

After clicking the white button on the cabinet, players were taken to the MKM Command Console. The MKM Command Console screen was an interactive command-line interface which let the player browse files on the machine. However, some of the files were only accessible to certain users. These users were named "UNKNOWN", "SKSE" (which decodes to "EYES" in X6I), and "OHXOE" (which decodes to "ATLAS" in X6I). In order to access these user profiles, players needed to find the corresponding passwords.

The password for UNKNOWN was given by a post-it note attached to the cabinet, which read "LOGIN UNKNOWN SYMMETRY", meaning that the corresponding password was SYMMETRY. Players discovered the password for OHXOE through a hint from Curtis, which read:

This showed that the password for OHXOE was "AFWAB", or "ORION" in X6I. The final password for SKSE was found through some guessing and context clues. One of the locked files that were only accessible to SKSE was titled "Sight Through Instability", which when combined with the idea of the third eye and the file title "Omnipotent and Omniscient.mkm", hinted at the password. Players then figured out that the password for SKSE was "AZBWDFSESBH" or "OMNIPRESENT" in X6I. After logging in with these three usernames and passwords, players were able to view all the files.

After taking the "some things work in reverse" clue from Kyren in Eyes of Entropy, players discovered that the reverse of the Virtual Dev Console code allowed access to a new screen. This new screen allowed the player to switch their active bias from Entropy to Primorda, or vice versa. This allowed players to access the other 'end' of the game, allowing both entities to have their stability reduced to the point where they should be destroyed. Since the game was modified to act as a simulation by Kyren, the effects of the game did not affect reality.

Upon reducing the stability of both entities in the game and achieving both 'endings', the arcade disappeared in the game. The player was then presented with a screen showing an 8-sided object that can be rotated with the cursor. Surrounding the object are various symbols, which were the same as the ones that appeared in the video "Last Recording of Oscar Butcher". The players did not settle on a name for the object, although potential nicknames for it included 'Magic D8' and 'Octacore', which referred to its eight sides.

After combing over this update, players decided to implore both Entropy and the Host (Curtis) about their thoughts on the findings. One player sent Entropy a message stating:

To which Entropy responded:

Entropy also attached an image to this message, titled "qabehfgqhwab.png", which translates to "construction" in X6I.

Another player then sent a link to an image from the Lord Bytesworth website, to which Entropy responded:

Another image was attached to Entropy's response.

On June 22nd 2018, another player messaged Entropy with a description of the 8-sided object, stating:

Entropy then responded the same day with another message:

On July 17, 2018, Curtis released the Mutation 3 update for Our Nation's Miner

Soon after, the Entropy YouTube channel updated to feature a new video. It opened with a cyphered text not seen previously. It then depicted varied scenes and environments, blending lore based rendered video, and real-world footage of various locations in London, England. All of the real world footage displayed handwritten overlays using all 4 previously known scripts.

It was discovered that the cipher, which players named MKM, was a variant of x6i.

Soon after, a new web address was found https://www.lordbytesworth.net/mkm/. The website prompted players for a password. Two weeks elapsed before it was understood.

Players then deciphered the text:

The live footage overlays were then translated.

Players found that using the last word of each phrase of the CAPS lines yielded a code TRUE SOULS LOVE ALL. When the phrase was entered into the MKS console, the Our Nation's Miner game changed from a 2D experience to an in-game 3D environment named The Sanctum. Exploring the new environment presented new mysteries.