Difference between revisions of "Heartbound"

Heartbound is an ARG created around the game of the same name. The ARG was discovered on April 5th, 2019 which started by finding the trailhead page on any of the pages on Pirate Software's website for the game.

The first page to Chapter 1 can be found in the bottom-right corner of the About, Cast, and FAQ pages of the site. Clicking on the glitched crack will open the first page titled "Glowbringer". 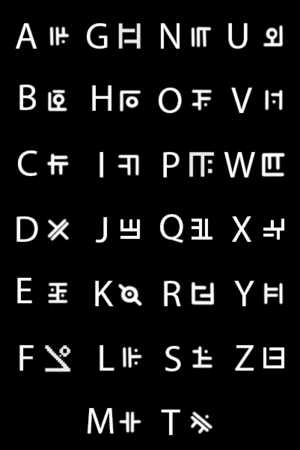 The translation guide for the glyphs.

On the page, there are 2 sets of guardian glyphs. They translate to:

This can be split into 2 parts. The first part being the div class, the second being the 2 comments below. The comments don’t seem to relate to anything necessary to solve this part. The div class however is the puzzle. "@Party | @...." is the hint to solving the comment inside. Another word for a party, is a bash. Add @ before bash and you end up with Atbash which is the cipher used on the text in the comment. So throwing GsvWzipmvhhVmxilzxsvh through an atbash decoder will get TheDarknessEncroaches. If you add that phrase onto the end of the URL for this page, you will get this page which will lead players to the next part.

The second page to Chapter 1, “Darksider”, features the same glyphs found in the first, translating them gives the following:

In the source code for the page, another puzzle can be found, and it reads:

This page follows the same pattern as the 2 before it.The glyphs translate to:

The source code this time reads:

As before, the 2 comments below the div don’t help with the puzzle. The hint for the puzzle is "13 + 64", and this is hinting towards using Rot13 and Base64 together. First, applying rot13 to ITuyEzylp3ECMxI2MKW5I29lMN and then putting it through a base64 decoder. The output will be TheFirstOfEveryWord. Once again, if adding that to the end of the URL will lead you to the next page.

“The Virtue”, unlike the other pages, doesn’t feature an image but instead is completely black. This page’s source code reads:

This time the div class contains 3 puzzles that result in one phrase, ”Have” is the first one and it’s exactly what it says, so the first part of the word is Have, taking a look at the second puzzle, 22NBK4456824048, they can be recognized as MGRS coordinates, which is the geocoordinate standard used by NATO militaries for locating points on Earth, searching them on Google Maps takes you to “Patience”, in French Guiana, “Patience” being the solution to the second puzzle we get the second part of the word, making it HavePatience, the last puzzle 6*;48†5(7, due to the use of “†” it was identified as the Gold-Bug cipher, which was created by Edgar Allan Poe and featured in the short story by the same name, running the encrypted text through a decoder you will get InTheDark, this concludes the set of puzzles making the word HavePatienceInTheDark. Adding that to the end of the current URL will take you to the last page of Chapter 1, “Don’t Hit That Button”.

This is the final page for Chapter 1. The source code includes a puzzle again along with 2 more comments:

See me Say me

The achievement gained after inputting the code in the game.

Using the code given at the end of Chapter 1 mixed with the hint leads players to input the code when first launching the game before pressing the continue button. Once the code has been successfully inputted, a faint laughter will be heard and the player will gain an achievement (steam version only) titled “Laughing Man”. After this happens, all the guardian glyphs that appear ingame will be translated so you can read them, as well as the game dropping a new file into the save directory named SeeMeSayMe.thor.

Opening this file with a text editor will show a huge string of characters.

The “==” at the end gives it away that it is base64 encoded, but running it through a base64 to text decoder will result in garble text. Instead, a PNG header can be found when looking at the top. With this new info, running the code through a base64 to image decoder (as opposed to text), yields this image:

The image after decryption.

This puzzle is similar to another one made by Jason “Thor” Hall (The game director and founder of Pirate Studios and the person behind this ARG) in 2015, called “Play Rude”. The name of the puzzle itself is a reference to the Playfair Cipher, but this one has a couple of twists, it features 4 tables and the encrypted text is in clusters with repeated letters. Taking a look at the encrypted text, it was found that the letters repeat 4 times at max, this was used to quickly deduce that the number of times a letter repeats was a indication to what table to use out of the 4 available. Because of this, the coded text, NNIII - UUUMMM - SSQQ - VVVVNNNN - YSSSS - QBBB - TIII - TTTLLL - YYXXXX was translated to DI - AN - RF - KL - SU - IE- DN - EC - RE, reading the first letter of each grouping, then the second one or writing the sequence vertically like so:

Will result in the string Darksider Influence, like in Chapter 1, putting this string right at the end of the HeartBound URL will give you a new page, in this case it’s called “Pact”.

This page is the first puzzle page of Chapter 2 and, like Chapter 1, taking a look source code reveals this message:

Here the puzzle consists of ”NotMyName” and What HE calls me…, with a bit of knowledge of the game’s story progression and using a part of the URL, Darksider Influence, as a hint, it was discovered that “HE” refers to a character ingame named Binder and “NotMyName” is The Artifact referencing to itself because the first time the player encounters Dark Lore is when the main character, Lore, first encounters The Artifact. Inputting TheArtifact at the end of the page’s URL will get you the next puzzle, Why are you here, usurper...?.

Looking at the source code for this page, it will read:

Here the puzzle consists of the mysterious file, TheyDancin.png - the first thing to do is to find it. Having a look at the game’s files turns up with nothing in return, but taking a deeper look at the code it was found that the website’s assets are stored in URLs of similar nature to:

Following the URL format, this image with drawings of dancing men was found, it was assumed this was text encrypted with the Dancing Men Cipher and the encrypted text was translated to BinderSentMe, adding that to the end of the URL will lead to the “What is it you want then...?” page.

Taking a look at the 5x4, the first line features +’s and -’s, this will be used later to decode it, while the other 3 contain various numbers but none go over 26, making it safe to assume that the numbers are supposed to be translated to letters, but writing them as letters as they are will result in a string of random letters because the numbers are still encrypted, to decrypt them we go back to the first line, +4 | +2 | +0 | -2 | -4, this was used to encrypt the numbers in the respective columns, so by switching the signals from + to - and vice versa you get what you need to decrypt the numbers, -4 | -2 | +0 | +2 | +4, applying this to the respective columns, so 18-4 is 14 and so on will give a new grid:

Who will benefit from this...?

The source code of this page reads:

Looking at the number, it can be determined that it is very similar to a Tweet ID from Twitter. Inputting the number into a twitter url reveals this image.

Looking at the image, some white pixels can be seen on the dog's nose. Zooming in shows a pattern of pixels.

The pixels are formed in 8 groups, with every 2 groups having a clear space between another 2 groups. If you count the number of pixels in every 2 groups, you get 23, 9, 12, 12. Using the letter numbers cipher, this gives the output will.

Secondly, looking at the Thor file, if it is put through a spectrometer, then the word Both can be seen.

Putting both words together gives BothWill, and this can be added to the end of the url to give the next puzzle "You will help me first."

You will help me first.

This can be appended to give the next puzzle, Do you agree?

The "Theatre Of Pompey" line is a reference to the place where Julius Caesar was assassinated, which infers that a caesar cipher must be used. However, a normal caesar cipher does not give a reasonable output.

"pull the necessary... strings" implies an instrument is being played. However, appending "strings.wav" to the usual url will give a 404 error. Instead, by searching through the Heartbound game files, a file called STRINGS.wav can be found.

This can then replace "DARKSIDERINFLUENCE" to give a new url and a new Chapter: Breakdown.

Counting the amount of letters in DHPHBAAJKEPTBGACUKKTKGRFULKDKAGFDLTDSAGJ, tells us that there are 40 characters in it, using this information and dividing 12410162315372 into the biggest possible without passing 40, we get 12 4 10 16 23 15 37 2, now if we take out every letter in the position referenced by the numbers, so 12 will be the 12th letter and so on, we get THECRASH, appending that to the end of the URL will take you to “The Sound Of Silence” puzzle.

The Sound Of Silence

Here the page is completely black and there is no sound, the source code is the following:

With nothing to go on, and with the hint being Ride The Wav, it was suspected that it was sound related, remembering how the URLs for stored sound files were formatted, this was found. Upon opening DTMF tones could be heard again, but this time it was in a different sequence, decoding them with a tool or manually through a spectrogram comes up with 1235 1 235 235 2345 134 1345 145 156 1234 134, the presence of numbers that never go over 6 and the groupings led to believe this is Braille, but attempts of decoding this with the normal format,

Didn’t work out, instead we have to use a format like this:

Decoding with this format gives the text PASSTHROUGH, appending that to the URL will take you to the next puzzle, “Into The Abyss”.

The div class, Bifurcation and Not a Triffid leads to believe that the cipher used to encrypt the text was a Bifid Cipher, the other part of the source code, Quick Foxes and Lazy Dogs hints towards the pangram, "The quick brown fox jumps over the lazy dog" which was the alphabet key used, throwing ZMREIMSGNK through a Bifid decoder with the alphabet key will result in the deciphered text DIVERGENCE. Switching DIALEDIN with DIVERGENCE in the URL will lead to the first puzzle from Chapter 4, “The Choice”

This time we have two puzzles, but one of them has so little info we can’t solve it now. Looking at ”Gridlocked”, the name suggests that there is a grid involved and counting the characters that are present in the string UEZPPXJNCLKMEDMWGFPUYTAQIBXHBCIVIPMOHFBYWSRJWSHNQVGFEODRQKDLUNMCFJZUXIIPGJYACTVVWPGTUSALQH, gets us a total of 90 letters, with these two bits of information we can make a 9x10, like so:

Friendship takes us to an image that is reminiscent of the Animus area ingame. The source code reads:

Sorrow takes us to an image that is reminiscent of the Tower area ingame. The source code reads:

Curiosity takes us to an image that is reminiscent of the “Fire” area ingame. The source code reads:

Indifference takes us to an image that is reminiscent of the “Ice” area ingame. The source code reads: