Difference between revisions of "The Secret World"

The Kiss of the Revenant puzzle trail is a promotional series of puzzles linked to The Secret World: Legends. It was created by Alice & Smith, who also created the Waking Titan and Dawn Bloom ARGs.

If you want to discuss the puzzle or get live updates on it, then there are three places where you can do so:

This page is a mirror of this page on the Cry Gaia Wiki.

This page documents the Kiss of the Revenant puzzle trail. Be warned - there are puzzle spoilers on this page (behind spoiler tags)!

The puzzle began when the official twitter for The Black Watchmen posted a link kissoftherevenant.com[1]. It had already been hinted at during the Developer stream on 16 Jun. 2017, the day before the announcement, that there would be something coming up.

Following the URL redirects to mmorpg.com/puzzle.cfm where the puzzle is located. 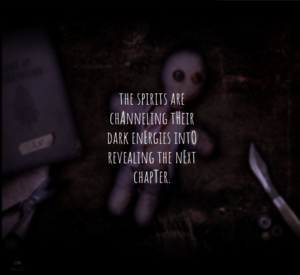 A screenshot of the puzzle's frame on mmorpg.com.

It was quickly discovered that some letters were bigger than others, spelling out AHEOET. Examining the page's source code, every big letter's HTML tag also had a number. The numbers are 98 105 116 46 108 121, which is the ASCII decimal representation of bit.ly. Using AHEOET as a bit.ly link, people would end up at cdn.kissoftherevenant.com/shadow-bound-anim.gif.

The gif found at the bit.ly link. This gif shows a shadow bound weapon, one of the possible rewards, in action.

Furthermore, on the puzzle page a 'cursed soul' can randomly appear at a random position within the frame. When clicked, the text '+1 cursed soul' pops up, but outside of that nothing seemed to happen. After the first chapter got unlocked, it became clear these unlock 'group rewards' when all chapters are completed (see the Rewards section down below). 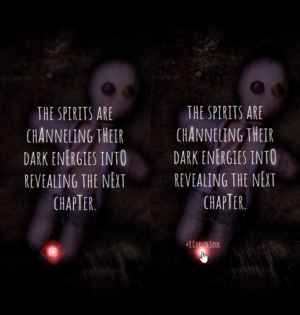 A soul appears at a random location. When clicked, the '+1 cursed soul' text appears.

People on reddit started analyzing the page's javascript code. This made clear that a server decides when a soul shows up, and is notified when that soul gets clicked on. Outside of that there isn't anything immediately useful to be found in the code, only some references that likely will be used in later parts of the puzzle, as well as that the puzzle will consist of multiple chapters. 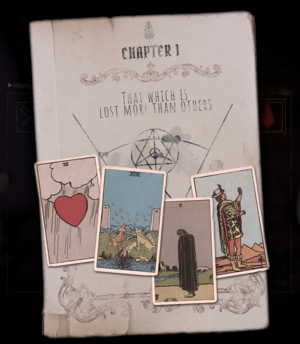 The secret page included with the first puzzle.

At approximately 12:18GMT 2017-07-17 the first puzzle unlocked. Clicking on the puzzle would play a short video, after which the hint 'Draw first upon the ground' is displayed. A secret page was given as well, containing four tarot cards with the hint 'That which is lost more than others'.

The Henderson mentioned in the video likely is Archibald Henderson. The video only provides some context however, and doesn't contain any clues. The Russian text seen in the video are Film leader. Here's a transcript of the narrator in the video:

The answer is what you would draw first upon the ground when binding a revenant.

The secret page provides another tip. The cards displayed are Tarot cards from the Major Arcana and Minor arcana:

The Suit of Coins also known as the Suit of Pentacles. A pentacle is what you would draw, and entering pentacles as the answer completes the first puzzle. The solution was posted on reddit. 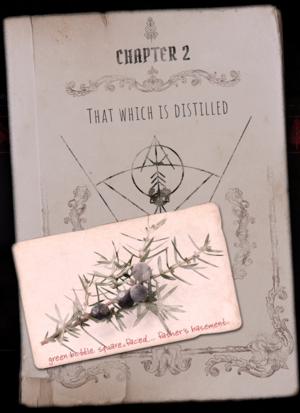 The secret page included with the second puzzle.

Clicking on the puzzle would play this video. Here's a transcript of the video:

The first part is the same as the email. Innsmouth refers to Innsmouth Academy most likely.

After the video a hint is displayed again, this time being 'Dried and held under the tongue'. Another secret page was given as well, this time containing the hint 'That which is distilled', together with an image annotated with the text 'green bottle, square faced... father's basement'.

The image depicts a type of berry.

The berry pictured is a Juniper berry, used to make gin. 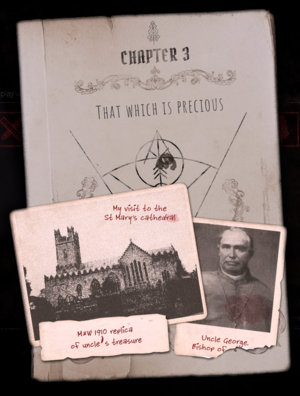 The secret page included with the third puzzle.

The third mission was unlocked when 13000 souls were reached at 23:47GMT 2017-06-22 during the Beyond the Veil stream with Tilty and Anashel. Again an e-mail was sent out, this time with the following text:

There was also a video with more of the story. Here is the transcript:

The hint this time was 'Place replica at the center of the pentacle for the new moon'. The secret page contains additional clues, stating 'That which is precious' as well as two pictures: one labeled 'My visit to the St Mary's Cathedral' and 'Uncle George, Bishop of...'. A piece of text saying 'M&W 1910 replica of uncle's treasure'.

The Cathedral is located in Ireland.

Try to find out who the Bishop pictured is. You got the Cathedral and his first name to help.

Try to find out what happened during that Bishop's time as Bishop in the Cathedral.

The Cathedral is St Mary's Cathedral of Limerick, the Bishop is George Butler. The Ardagh Chalice was discovered during his time as Bishop.[1] Hence the reference to uncle's treasure. The fact the piece of text says replica ties in with the main hint. The M&W refers to Mappin & Webb, who made a replica of the Ardagh Chalice in 1910[2] 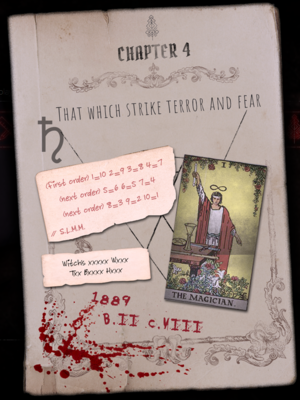 The secret page included with the fourth puzzle.

The fourth chapter was unlocked around 16:24GMT 2017-06-24. As usual, an e-mail containing a part of the introduction video was send:

As with the previous chapters, there is a video with some more of the story. Here is the transcript:

The hint this time was 'Spill the blood of the cat'. The secret page contains additional clues, stating 'That which strike terror and fear'.

What would a witch use to spill the blood of a cat?

It is a special type of dagger used for ceremonies.

A ceremonial dagger used by witches are also called an athame. What the other clues mean is still a WIP. 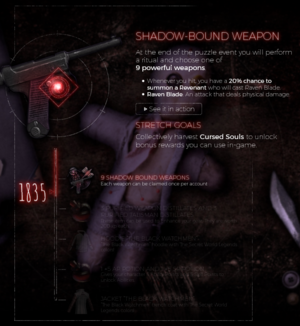 After the first puzzle was unlocked, the rewards screen became available, giving a preview of all possible rewards. These rewards include:

Only the weapons were unlocked when the rewards screen came available. The rest of the rewards had to be unlocked by collecting souls.

A piece of artwork is also given as reward for completing each puzzle.