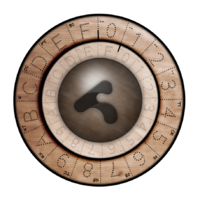 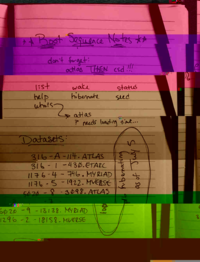 The section labelled "Datasets" above had a missing entry. By using the existing entries (referred to as "seeds"), players were able to reconstruct the missing dataset based on patterns: 5020-7-8118.ETARC

Once ATLAS.INIT is started, running START CSD.INIT resulted in the following message:

Typing the command SEED 5020-7-8118.ETARC into the command prompt at http://wakingtitan.com (after having run START ATLAS.INIT and START CSD.INIT) yielded the following response:

After waking loop16, players could run the command hello loop16:

The first, second, and third ciphers mentioned the Korvax, Vy'Keen, and Gek - the three races that are currently in No Man's Sky. The mention of `Race Fourth` in the fourth cipher could very well be teasing a fourth race for No Man's Sky.

The goal of this calibration process was to complete the progress bars of 40 cities, spanning at least 8 timezones.

On July 25th, at 22:41 UTC, an image was uploaded to the Google Drive. The image was a screenshot of the map on Project Waking Titan, but with the Chinese character for "dream" in the center. The 6th glyph was also unlocked around the same time, alongside a pdf with a message from Major Sophia Dubois to Elizabeth Leighton. This glyph prominently featured a butterfly knot in the background.

Interpreting the coordinates as points on a journey, players fleshed out the following sequence:

This yielded players a code to use with the cipher wheels from the bootsector puzzle.

Combining the cipher wheel code with the code at the bottom of the most recent PDF allows for the following decryption:

CAFE888 was the answer for the seventh glyph. The meaning of ‘CAFE888’ was yet unknown. Players theorized, discovering there was an ‘Orion Cafe’ on Roosevelt Island that has a street address of 888, only to find out it is no longer in business.

On 2017-07-29, at roughly 15:30 New York Time, reddit user /u/sz0bmi started a periscope livestream from the Atlas Statue. At 16:15 New York Time, a man with a purple umbrella led the crowd from the statue to an office building in Manhattan, splitting the group into teams of 6. Each team was given 30 minutes to solve a puzzle in a closed room. TehBatman supplied photos from the room while sz0bmi continued his livestream. At the same time, the Waking Titan Twitch channel started broadcasting the live event. It is worth noting that Emily, who had mysteriously disappeared since July 5th, appeared glitched in the Waking Titan Twitch stream. 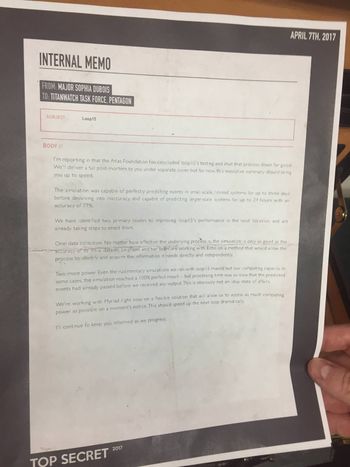 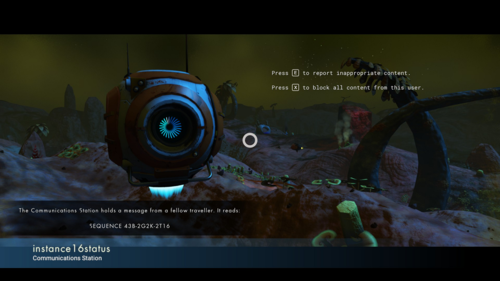 The first of 8 discovered Communications Stations

Entering SEQUENCE 43B-2G2K-2T16 into the console at http://wakingtitan.com returned the following message:

Players discovered a total of 8 Communications Stations near the Galactic Hub. Each one had a message of the form SEQUENCE XXX-XXXX-XXXX.

The locations and contents of each Communication Station were as follows:

The discovered commands had to be entered into the terminal in a specific order. The complete output of entering all 8 commands in the correct order can be found below:

At 19:07 UTC the STATUS command updated, confirming the completion of the sequence: 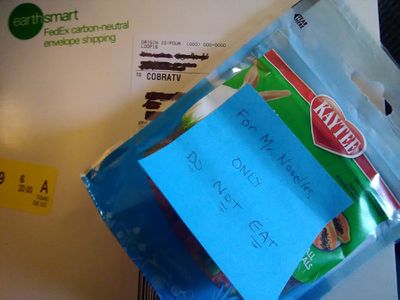 On August 3rd, individuals from the NMS community received different types of pet food, each being for small animals.

Each package was from "loop16" and has a blue sticky note that said "For Mr. Noodles ONLY. DO NOT EAT".

On August 4th, the STATUS command was changed to return:

The memo link lead to an internal memo from Major Sophia Dubois to All Staff which addresses concerns about the welfare of a particular test subject in the loop16 lab.

The feed link lead to a twitch stream consisting of an experimenters view of five monitors, a post-it pad, a pen, a Rubik'sCube, two network devices upon which a box was placed, several Sharpie markers, another post-it pad, an enclosure presumably housing one Mr. Noodles, a sphere containing an unknown, possibly nutritional substance, an audio mixing board, and a cassette tape. Five post-it notes were deployed: 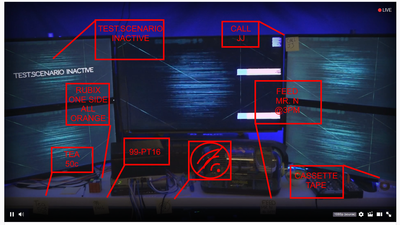 An Office for Mr. Noodles.

The remaining post-its were affixed to the edge of the supporting table, from left to right:

Shortly thereafter, a collaborative task began involving the commands of the twitch comment stream "voting" on the actions of a virtual hamster, and a maze was displayed upon the center display; the community was tasked with guiding the subject to the objective. Left-hand upper and lower monitors displayed SYSTEM CHECK and 30 MIN CYCLE, respectively, with the upper right monitor displaying the electorate. 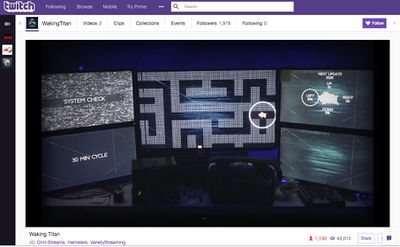 At about 04:30 UTC the monitors on the WT live stream changed to this image:

Each of the images represented a main section of emotions on Robert Plutchik's Wheel of Emotions.

Emailing Robert Plutchik to [email protected] as the answer to the puzzle returned this:

After that the center terminal updated to: 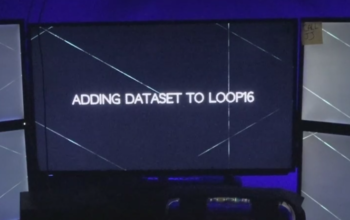 It is thought that the message is meant to be "Do you hear me". 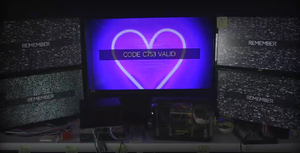 Image shown for a remember puzzle 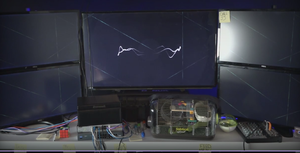 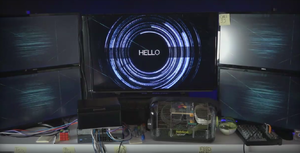 At 14:12 UTC emails were sent out saying "CYCLE ACTIVE" and included a link to the live stream. Soon after, different images and audio clips played, each leading to a command on the WT terminal in the format of REMEMBER [keyword], and giving a code to enter into the Twitch chat. Once the right code was entered into the chat as ![code], the next prompt would be displayed. Eventually, the command REMEMBER LOOP16 was unlocked, redirecting to a new pdf.

A list of all REMEMBER commands can be found here.

The center screen then switched to say Hello, and played a couple different animations.

At 16:00 UTC, the second stage of the collaborative maze challenge begun. The time limit to complete this challenge was 60 minutes.

Players ran out of time before reaching the objective, and were presented with the chance to extend the time by either 10, 20 or 30 minutes. After voting in favor of a 30 minute time extension, players were able to successfully reach the objective, and used the left-over time to explore the maze.

At approximately 4:00 PM EST on the 5th of August, the 8th glyph was unlocked. At around the same time, the project-wt map had the second lock on the left side of the screen become unlocked. Clicking the second lock highlighted 8 individual cities.

The eighth glyph included a link to a new PDF, which described an optional 'Advanced Calibration' task. 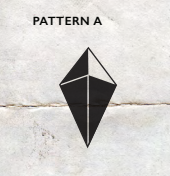 The Atlas symbol, AKA Pattern A

'Pattern-A' was included on the PDF, the symbol of the Atlas in No Man's Sky. The PDF also provided GPS coordinates for specific locations in each city.

The 8 cities available on the second layer of project-wt.com during this Advanced Calibration phase were Los Angeles, Dublin, Toronto, Melbourne, Paris, Stockholm, Cape Town, and Moscow.

On the Waking Titan livestream at around 20:15 UTC the center screen updated to "Terminal Command Turing". After running the command ``TURING`` in the Waking Titan Terminal it redirected to this reddit post to create a Turing Test for loop16.
At 00:30 UTC, the deadline for the Turing Tests was up and the screens updated to:

Each PasteBin link was a submitted Turing Test and were then soon voted, with D getting the most votes. Soon after the center screen announced that the test had completed and the bottom left screen changed to Terminal Command Emulate and running command EMULATE and redirected to the Test D with loop16's responses. A little bit later the screens changed to:

This page is a work in progress, and will be updated as new developments emerge.
Retrieved from "https://wiki.gamedetectives.net/index.php?title=Waking_Titan/Phase_2&oldid=8117"
Category: