Difference between revisions of "Waking Titan/Phase 4"

It is unclear whether Phase IV has officially begun, or whether these events are interstitial matter leading to a new phase. For our purposes we refer to these events as "Phase IV" until contrary evidence is presented.

Beginning on December 28th, 2017, typing WHOIS on the Waking Titan website returned the following: #WHATIS1.5. In addition, the 10th glyph was made active, and linked to a Google Drive folder, which contained community-made pictures of the NMS logo in an infinite mirror.

The titles of the photos, when strung together (skipping the 00 (empty) ones), formed the hexadecimal code for moirrr, which was an anagram for mirror. Additionally, the hexadecimal code in the correct order for the word mirror could be found on the bottom of the Myriad website.

Also of note was the background of the tenth glyph, which read:

The allusion to 10,000 passes is likely a reference to the Level 4 Atlas passes that were promised to players as part of earlier phases. The identity of "Gail" remained unknown.

On January 17th, 2018, the first CSD user received their Atlas Pass. The passes were made from cardstock, with a textured pass printed on it. The front had the text WAKING TITAN printed, and below that the CSD category the user belonged in. On the very bottom, a series of hexadecimals reading 70686f656e6978 could be found, which, after decoding, translated to PHOENIX. On the back, the owner's CSD-ID was written, along with a serial number stating which pass out of 10,000 the user had, and a number at the top.

On January 20th at 5:44PM UTC, the output of the STATUS command began to update:

Calling the provided phone number yielded an SSTV transmission (pictured below) which, once decoded, provided meteorological data for various locations.

Players found they were to order the list of locations in the image alphabetically. This yielded a sequence where Index by Precipitation could be read off. Using the ordered text indexed by precipitation (in alma the second index is o) led to the following:

The text indicated a new livedrop would be occurring in the same location as the last one had. However, due to the old Cafe Bene closing, the Xxxxx XXX part was added in the STATUS command update to warn players about the new venue, Outro NYC, which opened in the same place as the Cafe Bene had been located. The livedrop was intended to occur at 7PM EST (12:00AM UTC). However, the first player from the community who set out for the drop was involved in a traffic mishap, delaying their arrival. Anticipating missing the drop's time window, the community reached out to request a time extension, and the STATUS command, which had updated frequently throughout the confusion, was updated again to approve the community's request.

After the extension was approved, a second player from the community set out to the livedrop location on livestream and met with their A&S contact around 7:30PM EST (12:30AM UTC). During the meeting, the player was handed a memo from a mysterious case disguised as a book, pictured left. After some cryptic conversation, the contact asked if they were "getting enough sleep", stating that being well-rested would be very important. After the meeting, players who had attended the livedrop met in another location and showed off the memo, speculating about it's contents and even discovering the REM Sleep connection to the letters on the memo's back. After the livedrop, the community used the livestream to look over the memo, pictured below. On the back of the memo REMS is written. This clue, in combination with the strange question A&S asked at the rendezvous, led players to the password for the 10th Glyph, REM SLEEP.

Once the glyph was solved, the STATUS command updated to a bit.ly link to a form. Players discovered that on the sixth question on the form, entering REMS or REM Sleep (case sensitive) caused a seventh question, pictured right, to reveal itself, allowing CSD users to enter their email address to receive "left over materials" from something called Lab 319. Players remained unclear on what exactly Lab 319 was or what it's leftovers were, however signing up seemed integral given the input is only revealed after using the REM Sleep phrase.

On 26 March, 2018 at 05:25 UTC an event occurred. The Myriad site came online featuring indications of a solar event interfering with operations. In addition, the status command on Waking Titan briefly displayed the following:

Ten minutes elapsed before the Status command began to display the following:

This hexadecimal string was used to reference a connection the private key for an Ethereum cryptocurrency wallet related to an ostensibly "promotional" event for an upcoming product from V/RE.

At 1:11 AM, UTC, Myriad-70.com updated, and the updates included the following.

Soon after, at 1:30 AM UTC, the Status command updated in the Terminal to say the following.

Approximately 15 minutes later, clients began to disconnect, beginning with Client 0911a, second being Client 18d1a, and the last being Client 351h, who had an additional piece of text added, being ID: 79657321, which was translated as hex into Yes!

Of the sites found in the 52.2.248 range, 52.2.248.6 was found. Using the metadata found in the HTML and searching on Google, the domain and Twitter were located as well. The site is in Chinese, although Google Translate gives a good, readable translation.

On the ware-tech website, if you subscribe, you receive an email with another 3 characters: 30 31 38, which again in Ascii becomes 018. Together this gave a bit.ly link that leads to the W/are Discord channel.

On Discord, we were informed of a community puzzle that was going on by the admin. Members of the W/ARE Discord had received tweets from another account, https://twitter.com/w9rPQ45E, which had seven tweets with hex code in them:

Translated into Ascii, these tweets give the following:

Two things have been done with these strings. Together, they are the Private Key for the Ethereum account the money was transferred to. It has since been withdrawn to a different account. Second, if you put the two strings together and compare them with the string from Waking Titan's console, every odd character matches the strings from Pastebin. edb044c81d40a196c4672a2bd6f17f1f6b67fbb5e90ddcda8a921656d0b30a20

Three hours after the W/ARE Discord Admin let the community know about the puzzle, at 6:01 PM UTC they returned and said 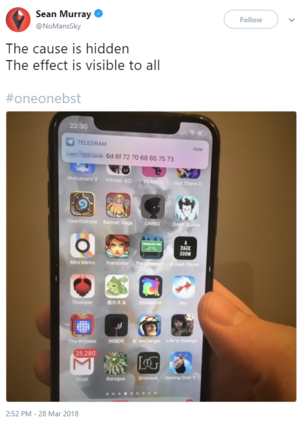 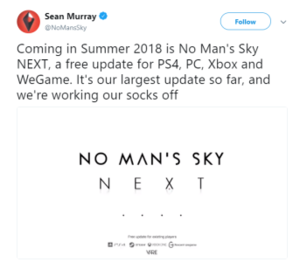 The announcement for No Man's Sky: NEXT

At 9:26 PM UTC, the Mercury command updated to say the following.

This puzzle required a user to solve the riddle shown below, convert the answer into hexdecimal, and send it to an official Telegram account run by one of the Puppet Masters.

The puzzle was as follows: “Descended from Night, I share the blood of nightmares. Look forward to the gates of horn and ivory”

This puzzle was solved by searching "The gates of horn and ivory", which resulted in dreams and nightmares of Greek mythology. After noting the capital N in "nightmares", users found the Greek god of night, Nyx, which led to one of her children, Morpheus, who was one of the Oneiroi, and the god of dreams. The name was then converted to hexdecimal and sent to the Telegram account, and the terminal accepted the password, resulting in the following command update.

Then, at 9:54 UTC, the Mercury command updated again, and said the following.

The shortened link redirected to a tweet from Sean Murray, which said The cause is hidden. The effect is visible to all. #oneonebst

The tweet also included a photo of someone, presumably Sean himself, holding a phone receiving a Telegram notification, which was Morpheus in hexdecimal. The hashtag spells out 11BST, or more precisely, 11:00 BST, or, 10:00 UTC. No updates were made at 10:00 PM, and was then confirmed to be counting to 10:00 AM.

Once the time came, at 10:00 AM UTC, Hello Games announced the next update for No Man's Sky, which was No Man's Sky NEXT, set with a launch date for Summer of 2018.

Screenshot of the W/ARE newsletter

On April 2 at around 23:30 UTC, user W/ARE came online in the W/ARE Discord to announce that the next giveaway would be sent out in a newsletter within the next hour. They also mentioned the upcoming launch of their new translated English website, new extranet and the release of a "WARE cryptocoin", and asked users who are planning to be at PAX East to let them know at [email protected] with "PAX EAST - YES!" in the subject line.

At 00:30 UTC the newsletter started coming in via email. It announced that 25 winners were selected to receive Steam keys for games from W/ARE partners, such as The Shrouded Isle and Future Unfolding. It also included a link to an Application Form for indie developers to apply for a Developer Kit of W/ARE tech. The best applications will be up for a public community vote to decide which games will be launched on the W/ARE platform.

Around the same time, the Status command in the Terminal updated to say the following:

On April 6, 2018 at 6 PM UTC the W/ARE website updated with the new English translation and access to a Developer Area containing a sign-in form.

On April 8 at 01:19 AM, the Status command updated with the following output:

The filename leads to a corrupted image hosted on imgur, depicting a partial area map, a satellite, and the word "MYRIAD".

On April 8 around 00:49 UTC, players who previously sent emails to W/ARE about attending PAX East received the following response:

The path of EMU was determined by searching for a specific range of clustered booth numbers on the floor plan. Assuming Down is East, starting at booth 17102 and subtracting 997 from that number gives us 16105, which is to the East directly next to booth 17102. Continuing this with the rest of the coordinates:

Ultimately creates this path between the eight booths: 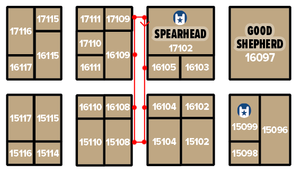 Several users met with the contact between 4 and 7 PM UTC and were given a total of four USB drives. Each drive contained an image and a text file. 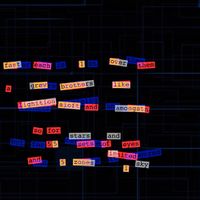 USB drive images overlayed
Using this as the password for the login form on extranet.ware-tech.cloud and combining it with the email address from the text files as the username granted access to the Developer Area. It presents an overview of user statistics and an empty cryptocoin wallet.