Difference between revisions of "Waking Titan/Phase 4"

From December 28th, 2017, onwards, typing WHOIS on the Waking Titan website returned the following: #WHATIS1.5. In addition, the 10th glyph was made active, and linked to a Google Drive folder, which contained community-made pictures of the NMS logo in an infinite mirror.

The titles of the photos, when strung together and skipping the 00 (empty) ones, were hexidecimal for moirrr, which is an anagram for mirror. Additionally, the hexidecimals in the correct order for the word mirror can be found on the bottom of the Myriad website.

Also of note is the background of the tenth glyph, which reads: 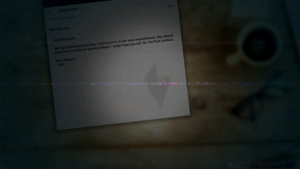 The allusion to 10,000 passes is likely a reference to the Level 4 Atlas passes that were promised to ARG players as part of earlier phases. The identity of "Gail" remained unknown.

On January 17th, 2018, the first CSD user received their Atlas Pass. The passes were made from cardstock, with a textured pass printed on it. The front had the text WAKING TITAN printed, and below the CSD category the user belonged in. On the very bottom a series of hexadecimals 70686f656e6978 could be found, which, after decoding, translated to PHOENIX. On the back the owner's CSD-ID was written, along with a serial number stating what pass out of 10,000 the user had, and a number at the top.

The update period was this:

Calling the provided phone number yielded an audio sequence, which was translated via SSTV to different places with weather data, especially the data contained precipitation informations. The images themselves can be viewed below.

Upon decoding the text, ordering the list of locations in the image by the letters, players yielded a sequence, where Index by Precipitation can be read off. Using the ordered text, indexing by precipitation (in alma the second index is o) led to the following:

The text marked for a new livedrop happening in the previous livedrop location. Due to the old Cafe Bene closing, they added the Xxxxx XXX part in the STATUS command update to warn players about the new venue: Outro NYC. The livedrop was intended to occur at 7PM EST. However, the first player from the community who set out for the drop was involved in a traffic mishap, delaying their arrival. Anticipating missing the drop's time window, the community reached out to request a time extension, and the STATUS command, which had updated frequently throughout the confusion, was updated again to approve the community's request.

After the extension was approved, a second player from the community set out to the livedrop location on livestream and met with their A&S contact around 7:30PM EST. During the meeting, the player was handed a memo from a mysterious case disguised as a book, pictured left. After some cryptic conversation, the contact asked if they were "getting enough sleep", stating that being well-rested would be very important. After the meeting, players who had attended the livedrop met in another location and showed off the memo, speculating about it's contents and even discovering the REM Sleep connection to the letters on the memo's back. After the livedrop, the community used the livestream to look over the memo, pictured below. On the back of the memo REMS is written. This clue, in combination with the strange question A&S asked at the rendezvous, led players to the password for the 10th Glyph, REM SLEEP.

Once the glyph was solved, the STATUS command updated to a bit.ly link to a form. Players discovered that on the sixth question on the form, entering REMS or REM Sleep (case sensitive) caused a seventh question, pictured right, to reveal itself, allowing CSD users to enter their email address to receive leftover from something called Lab 319. Players remained unclear on what exactly Lab 319 was or what it's leftovers were, however signing up seemed integral given the input is only revealed after using the REM Sleep phrase.