On the August 27th 2014, a Twitter account with the handle @BlackMesaRF appeared and sent its first tweet, claiming to be the Twitter account of the Black Mesa Research Facility, the setting for the original Half-Life game. Over the next year and a half it sent multiple tweets a day containing seemingly generic phrases that one would expect to hear over an announcement system. However, occasionally some strange messages would appear on the account's Twitter feed, in particular the repeated phrase prepareforunforseenconsequences. This continued until...

On April 19th, @conxact sent a tweet which decoded to display a dropbox link, x.wav. It was soon realized that this audio file contained an SSTV image, 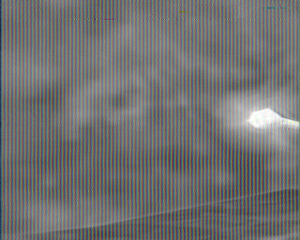 The first SSTV image.
which appeared to show a Xen light stalk, similar to the one shown here . After this, @conxact posted many more .wav files which produced SSTV images, the complete list of which can be found here.

A Vortigaunt (or possibly multiple Vortigaunts) was the original controller of the @conxact Twitter account. They favoured Base64 as a method of encryption, but later used plain text. They gave warnings about the events of 2016-05-16 as well as that X is not trustworthy. They could also be communicated with on a Discord server. However, they later disappeared and X mentioned that "That particular individual is not available, and likely never will be again. However, another has taken their method of communication.".

xxxxx, often shortened to X, is believed to be the "G-Man". He first appeared on a Discord server linked by conxact, but has also been able to tweet from the @conxact Twitter account, favouring ASCII85 for encryption. He has given many warnings about the Black Mesa Incident on 2016-05-16 as well as the Aperture Science Bring Your Daughter To Work Day on 2016-05-10. Conxact warned that he is not trustworthy and may be trying to waste time.