From Game Detectives Wiki
Revision as of 21:47, 8 October 2019 by Mangell03 (talk | contribs)
(diff) ← Older revision | Latest revision (diff) | Newer revision → (diff)
Jump to: navigation, search
A checked version of this page, approved on 8 October 2019, was based on this revision.

On the 5th of October, A researcher discovered a Twitter post with the caption; Start your journey in the abyss of horror....

with a link to the Cyrano Story site. 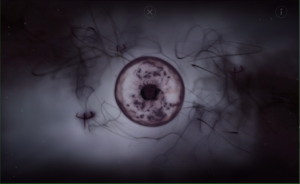 When researchers entered the first node, three, three-point symbols could be seen fading in an out.

When clicking the top-left symbol, an image of a female statue was shown.

Inputting the name Aphrodite caused an audio to play of a female saying:

Researchers discovered that the text was an excerpt from Homer's Iliad, Specifically the section where Zeus speaks to Ares after the Battle of Troy.

Inputting The name Ares cause the same audio to play.

When clicking the top-right symbol, and image of an astral body was shown.

researchers discovered that the body was an image of the Mars 1 Moon, which is the same name of Ares and Aphrodite's Son: Phobos.

Typing the word sleep caused the voice to speak again:

Whereas replying No caused him to say:

After this, researchers gained the first transmission, which was Dr. Olivia Myson's Personal Log No.47 | Transcript

and an image of the first page of a redacted Non-Disclosure Agreement.