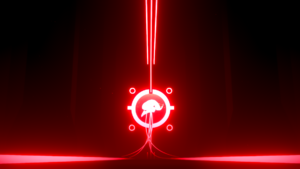 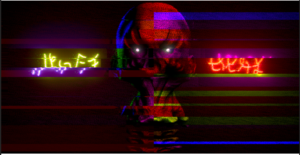 On 26 March 2018, a tweet was posted on the Entropy Twitter account. Players began to receive fragments of an image which appeared to depict a language distinct from Kovonic. Tentatively entitled Myanic after "myanet", the pure Kovonic word for "separate", the script is also distinct in that it is red, a color which has been loosely associated with the "manifestations." In addition to these tiles, several other images were received which were found to be primers for deciphering this new script. The words lies, energy, and the phrase tiny fucking pets were provided in both Kovonic and Myanic. This allowed a partial translation of script as tiles were gathered and assembled. 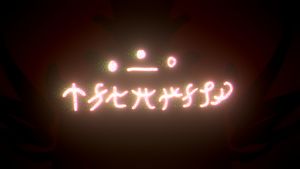 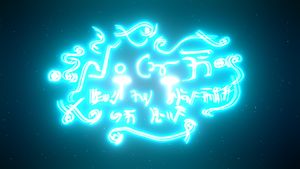 "Be Gone..." in Kovonic, tweeted by Entropy 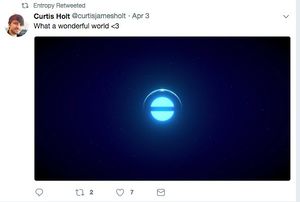 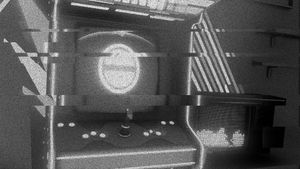 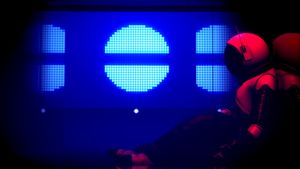 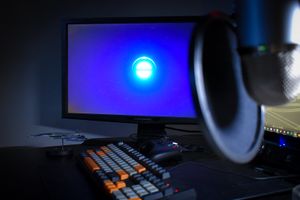 "Does this seem familiar?"

He attached an image with the X6I encoded filename "tool.jpg". Entropy retweeted the image within 3 minutes of Curtis' tweet. 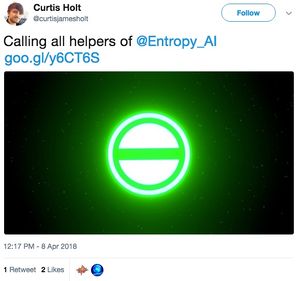 On 8 April 2018, Curtis and Entropy tweeted in rapid succession. The host's tweet included a link to a PDF describing a method to construct a "human" sequence for use in combating the primordial entity. It outlined several constraints which should be observed in its construction, and outlined a rationale for the color green for this new script. The community was charged with its construction, based upon these constraints. Curtis later remarked: 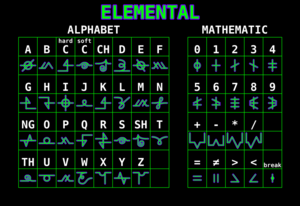 On 12 April 2018, Curtis posted an X6I encoded message to the Discord channel: 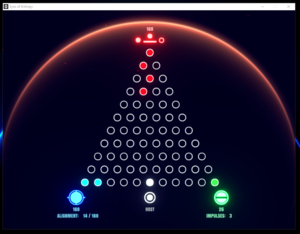 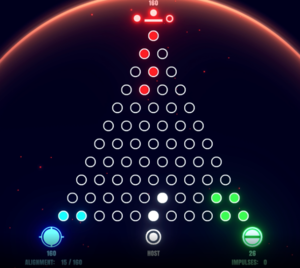 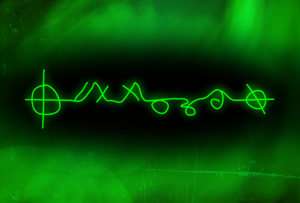 Elemental phrases and digital artwork were created and shared. Each time a new impulse was awarded, Discord voted on the next coordinate to occupy. The collective strategy- isolate the bottom 0-11 from Primorda. Primorda had made only 1 move since Eyes Of Entropy was released.

Over the next 5 days, players continued to generate impulses and collectively decide where each was to be placed on the board. During this period, Entropy made 1 additional move.

At some point on the 27 April 2018, the Eyes of Entropy display changed, replacing the game board with white text. After this was noticed and posted to the Discord channel, two more text strings were displayed for 5 minutes each and then finally returning to the game board.

On 28 April 2018, Curtis announced on Discord his submission to the Waking Titan W/ARE video game contest. In addition to the website, Curtis submitted a playable Unity-based game demo. Players soon discovered 2 PNG images (Note1 Note2) and 1 PDF file embedded deep within the file structure of the demo that were directly related to the Entropy ARG. The PNG images contained cryptic sketches and difficult to read handwritten text. The PDF was a message directly from the entity known as K. It explained K's relationship to our reality and that our Verse is running inside the Black Box as a simulation. 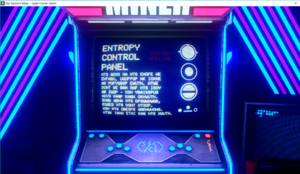 Later that day, Curtis posted in X6I to Discord, which translated to: 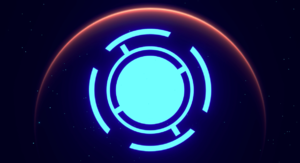 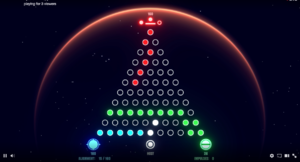 On 2 May 2018, Entropy tweeted a new pastebin and an image assumed to depict the crash site of the Sonder: planet EXO-1964822. 40 minutes later, Entropy tweeted a second version of the image, this time using a red hue with Myanic text. The Myanic translated to "HERE WALL".

Players then proposed an experiment. The hypothesis was conceived to test the idea that players could affect the movement of the Host in Eyes of Entropy through Curtis. Curtis then posted a move, which was quickly accepted. The new move captured an existing node previously occupied by Entropy, giving players new insight into the rules of Eyes of Entropy.

5 minutes later, Entropy posted a new video to the YouTube channel. The video depicts a text console. Words appeared letter by letter. The full text was a log entry from Sonder crew member Veera Schanpp, logged prior to the crash.

On 4 May 2018, Entropy tweeted a new video titled "Distress Signal". The description of the video contained a link to lordbytesworth.net. The website only has one project listed called "Our Nation's Miner". The image on the page appears to be zoomed out image of the Entropy Control Panel discovered in the Eye's of Entropy demo. It also says that an overhaul for the game is coming in Q2 of 2018. Below that a description is given:

Further down, the page links to the steam store page for the game.

In addition to this, another page was found on the site "gbybaib", which is "unknown" in x6I. The page contains the following text:

Soon after an image was tweeted. Which contained the following x6I-encoded text:

The text was then decoded, which gave us the plain-text message:

On 10 May 2018, Curtis announced to Discord a free beta version of the enhanced re-release of Our Nation's Miner.

On 25 May 2018, Curtis announced a new version of the game. It was explained that the new version contained many bug fixes and new Entropy related easter eggs scattered throughout the game.

It was quickly discovered that the game asked players to choose from a menu of options.

As players advanced through levels of the arcade experience, important information was revealed.