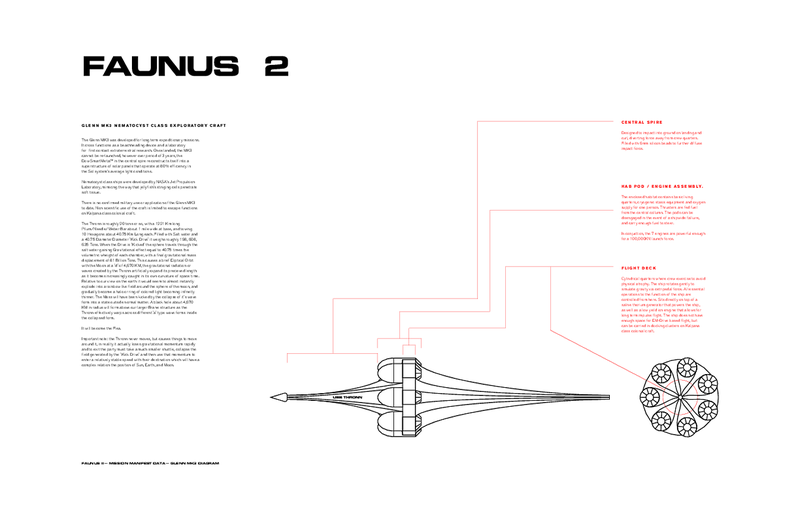 The Glenn MK3 was develeoped for long term expeditionary missions. It cross functions as a beachheading device and a laboratory for first contact extraterrestrial research. once landed, the MK3 cannot be relaunched, however over period of 3 years, the Day SmartMetal(tm) in the central spire reconstructs itself into a superstructure of solar panels that operate at 80% efficiency in the Sol system's average light conditions

There is no confirmed military use or application of the Glenn MK3 to date. Non scientific use of this craft is limited to escape functions on Kalpana class colonial craft.

The Thronn is roughly 20 tons or so, with a 1221 Km long Plum/Needle/Weber Bar about 1 mile wide at base, and to wing 10 Hexagons about 40.75 Long each. Filled with Salt water and a 22.75 Diameter Diameter 'Kick Drive' it weighs roughly 198,638,636 Tons. When the Drive is 'Kicked' the sphere travels through the salt water gaining Gravitational effect equal to 44.75 times the volumetric weight of each chamber, with a final gravitational mass displacement of 81 Billion Tons. This causes a brief Elliptical Orbit with the Moon at a idle of 4,670KM, the gravitational radiation or waves created by the Thronn artificailly expand its precise wavelength as it becomes increasingly caught in its own curvature of space time. Relative to our view on the earth it would seem to almost instantly explode into a rainbow like field around the sphere of the moon, and gradually become a halo or ring of colored light becoming infinitely thinner. The Mass will have been kicked by the collapse of it's wave form into a state outside of normal matter. A black hole about 4,570 KM in radius will form above our larger Brane(?) structure as the Thronn effectively warps across different 'a' type wave forms inside the collapsed forms.

It will become the Arus (?)

Important notes: the Thronn never moves, but causes things to move around it, in reality it actually loses gravitational momentum rapidly and to exit the party must take a much smaller shuttle, collapse the field generated by the 'Kick Drive' and then use that momentum to enter a relatively stable speed with their destination which will have a complex relation the position of Sun, Earth, and Moon.

HAB POD / ENGINE ASSEMBLY. This enclosed habitat contains basic living quarters, cryogenic stasis equipment and oxygen supply for one person. thrusters are fed fuel from the central column. The pods can be disengaged in the event of a shipwide failure, and carry enough fuel to steer.

In conjunction, the 7 engines are powerful enough for a 100,000KM launch fence

FLIGHT DECK Cylindrical quarters where crew exercise to avoid physical atrophy. the ship rotates gently to simulate gravity via centripetal force. All essential operations to the function of the ship are controlled from here. Sits directly on top of a saline thorium generator that powers the ship, as well as a low yield ion engine that allows for long term repulse flight. The ship does not have enough space for EM-Drive based flight, but can be carried in docking clusters on Kalpana class colonial craft.

Click on a date/time to view the file as it appeared at that time.

The following page links to this file: