Kill Your Internet was an ARG created by Camouflaj, connected to their game République. It was focused around a retro Bulletin Board System and its administrator, KatherineTheGreat. Puzzles included interacting with chatbots hosted on the BBS, solving puzzles on in-fiction sites, and playing games. The ARG concluded with an IRC chat session between the players and KatherineTheGreat, as well as KtG's artificial intelligence Shahrazad.

The site runs on the WordPress blogging system and has a visual style very reminiscent of the 90s/early 00s internet. Kill Your Internet is run by Camouflaj, the developers of the game Republique. On March 17, they made a post on their Kickstarter page, linking to the Kill Your Internet site.

On 2016-03-18, this post was made on Kill Your Internet, embedding a BBS system (Bulletin Board System - a precursor to modern internet forums). The BBS was hosted at cypherpunkbbs.net:23 which claims to be for "Digitilsoft, LLC" and was dated 1987. A phone number was also given, as well as a login prompt. There was also a message at the front of the BBS, explaining how to log in or register a new user on the BBS - but registering a new user required a password of its own. Finding this password was the first puzzle. 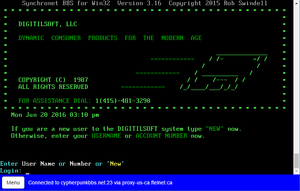 The home page of the BBS

By entering the password 12345 (the same number of days remaining on option 2 and a likely default password), /u/tjjos was able to log in as a system operator on option 4, which then presented two further options: 1, System Diagnostics; or 2, Listen to System Operator Voice Support Tickets.

With the help of Discord user nanoi, Ev Donald's code was successfully identified as 71469122 and was used to log in to the Technician Support Hotline option, which then informs the caller that the password for user creation is 4E6A863C.

Entering "New" to create a new user, and inputting the password 4E6A863C when prompted, asks some basic questions that set up your account on the BBS. It then continues with some basic information about the BBS and how to use it, and concludes with this message:

The logo displayed when logging in to the BBS

The Search for the Archives 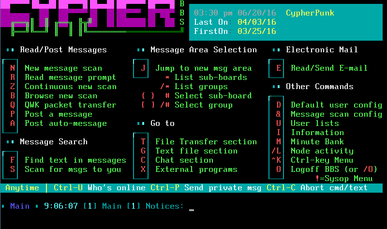 The main menu displayed when logging into the BBS

The BBS has many different options available, including a directory of text files and a chat bot named the Guru. Pressing 'G' on the main menu of the BBS to get to the text files that are hosted there leads to a list of 13 files. Discord user Emoticon created a Pastebin documenting the contents of the 13 files. Only the 13th file is relevant to the puzzle: it encourages the reader to ask the Guru about the archives, and mentions the letters S, E, P, L, I, C, and E. Discord user nanoi figured out that "S E P L I C E" is an anagram of "ECLIPSE".

Pressing 'C' on the main menu of the BBS, and allows the user to "Talk with the System Guru (Artificial Person)". Speaking to the Guru and then asking it "access to the archives?" has it reply with the following message:

Discord users successfully decoded the corrupted binary to read "VULN3RABI7ITY". Typing this in causes the chatbot to respond further:

The bit.ly link leads to a .txt file hosted on Dropbox:

Discord user Emoticon solved the answer to A to be Stanford, B to be Deep Blue, and C to be 04/05/99 or 05/04/99. Openpuff was discovered to be a steganography tool hosted by Berkeley University whose page also links to a "CypherPunk manifesto".

Pressing T on the main BBS menu shows a file transfer menu from which many files are accessible. Pressing D here allows one to browse through the various files uploaded to the server. Pressing G selects the correct protocol to download a file; if using the BBS client on KillYourInternet.com, one must then click Menu and then Download to download the file.

Most of the files are assorted texts, games and tools that fit with the BBS theme and are uploaded by Th3w0lf. free.txt was uploaded by Aaron Ly. The most interesting file, Pictures.zip, was uploaded by Unknown.

The image that hid the Archives.zip file

Discord user whizzer0 hosted a copy of pictures.zip on their Google Drive for faster access, with just the 9 extracted photos here. Discord users realised the filenames of the photos were hex and solved them, but they only held thematic relevance.

We are Being Watched

Meanwhile, other Discord users reported having received a post from KatherinetheGreat on the BBS, suggesting that she was watching the Game Detectives' progress:

Soon after, multiple users reported receiving strange messages when talking to the chatbot:

Archives.zip (mirror needed) contained a variety of documents pertaining to the BBS sysop, KatherineTheGreat's, history; her education at university, development of a sentient AI she called Shahrazad, and the attempt that was made by the U.S. government to confiscate Shahrazad. Rather than let Shahrazad fall into the hands of the government, she opted to destroy it. Archives.zip also contained this file:

The four blocks of text at the end of the file were decoded using the ciphers referenced in the main text: Gronsfeld, hex, Caesar, and Morse code:

Finally, from adding the dots & dashes in each paragraph of the file, Discord users got this Morse code:

Discord users asked the chat Guru about 'spammimic', which led to this website that could be used as a way to encode and decode messages hidden in what appeared to be spam. There were various spam messages found throughout the ARG: 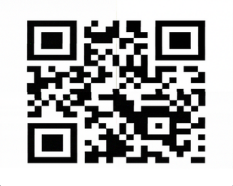 In each video, some sections had what seemed to be SSTV signals. Discord users translated the signals from all 4 videos into a single QR code, which led to a Dropbox link that contained more files. Again, most of these files pertained to the lore of the ARG and described KatherineTheGreat ultimately ending up on the run from the authorities with her friends. However, one of the files was different:

53 48 41 32 35 36 is a hex sequence that can be converted to text, meaning SHA256. This led us to believe that the middle line of the file was a hash encrypted with SHA-256. Discord users Benolot and Durendal used Hashcat, a hash brute-forcing tool, to solve the hash over the course of a several hours. Once solved, this hash would be the password needed to connect to the IP provided in the file: 52.53.251.28.

Discord users finally cracked the hash - [email protected]!6i7 was the result of the hash check.

We were able to gain access to 52.53.251.28, SSH'ing into it with the username "root" and the password "[email protected]!6i7". The directory /etc/passwd led to another message, that urged readers to send an email to [email protected] Shortly after this discovery was made, KatherineTheGreat appeared in the GameDetectives discord with the username 4b7447. She congratulated us for our hard work, and then went on to say this:

(Note: Treglazov is the fictitious dictator of the oppressive Metamporphosis regime that Katherine is on the run from, in the fiction of the ARG. Metamorphosis and Treglazov exist in the video game Republique.) 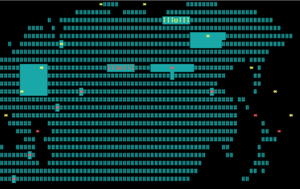 ASCII representation of the satellites posted on the bulletin board. The red satellite contains Shahrazad, while the yellow satellite is the Metamorphosis satellite.

About 30 minutes before the scheduled time (Saturday 4/2 @ 9:00 PM PST), KtG messaged users on the BBS, telling them to join an IRC channel: cypherpunkbbs.net/6667, #punks. A complete chat log of the evening can be found here.

After joining the server, we were greeted by KatherinetheGreat and her AI companion, Shahrazad. Shahrazad was uploaded to a satellite called Remus that was equipped with a laser, which was used to destroy a Metamorphosis satellite. "Radar images" (in ANSI form) of the satellites were posted to the BBS as KtG and Shahrazad continued to chat with us in IRC. These images can be found here, courtesy of Jr.

Shahrazad was able to get some information from the satellite before destroying it, including some classified files and Metamorphosis' internal news site, The Evening Standard. In those classified files, ESIS_PASS.txt revealed that the password for Evening_Standard_Internal_Server.7z was a combination of answers to puzzles hosted on the Evening Standard site. Evening_Standard_Internal_Server.7z was unlocked with the password "ambiguousenigmaprohibit729531864", which yielded a hash.

Cracking the hash gave the password "[email protected]", which was used to unlock DoD Files and e-mails.7z. (This password is weird and contains a newline character, so it may not work for you - the decrypted file can be found here). The file contained sensitive information about Treglazov, leader of Metamorphosis, and KtG concluded this information would be helpful to the resistance - this sensitive information was the end goal of this entire escapade. After thanking everyone, KtG claimed to be hearing sirens and seeing police lights, before signing out of the IRC channel.

Shortly after this, we were given a bunch of free keys for Republique on Steam, and congratulated by its creator. This suggested that the ARG had reached its conclusion.