The Lucid Nightmare was a puzzle trail hidden inside the massively multiplayer online role-playing game World of Warcraft, made by Blizzard Entertainment. The end goal of the puzzle trail was to unlock a mysterious mount, which is called Lucid Nightmare.

All steps must be followed in order, as the subsequent items and locations are either unavailable or uninteractable otherwise.

The primary solving hub for this puzzle was the WoW General Secret Finding Discord. 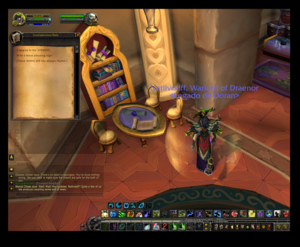 The Inconspicuous Note at coordinates (50.8, 54.1) in Curiosities and Moore, Dalaran

On August 30, 2017, an Inconspicuous Note was discovered in Curiosities and Moore, Dalaran (Broken Isles). After being activated, the note reads:

The seven numbers in the first line are an anagram for a date: 2009-4-15. This date was the release date of Ulduar, another in-game region.

Accordingly, the next clue was found in Ulduar. 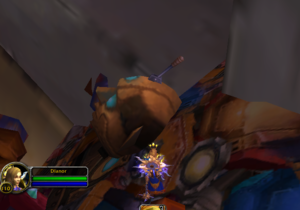 After heading to Ulduar and killing Flame Leviathan, a Dusty Lever can be found on a pile of scrap in the far left corner of the room containing the XT-002 Deconstructor boss. When activated, a 20 by 20 grid of lights appears on the floor of the room. Each light can be individually toggled by the player.

The lights must be toggled into a pleasing sign, as described by the first Inconspicuous Note. This sign is a pixelated appromixation of the sigil of Mimiron, the creator of both the Leviathan and Deconstructor bosses.

Once the pattern is completed, another Inconspicuous Note appears in the center of the room, which reads as follows:

The note describes the Vault of C'Thun, in the Temple of Ahn'Quiraj, which was sealed 1000 years ago according to the game's lore. 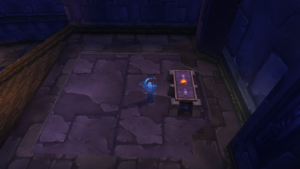 Deep within the Temple of Ahn'Quiraj (AQ40), there is a side path beyond the entrance of the final boss's chamber. At the top of the staircase there, a Mind Larva can be found on an altar. Activating the Mind Larva will begin a Jewelcraft-style minigame, named "Mindcraft", on an 8 by 8 grid floating in front of the player character's face.

In this genre of game, symbols can be swapped with their horizontal or vertical neighbors, and if that swap forms a row or column of at least 3 identical symbols, the matched symbols are removed from the grid. Symbols above the empty space fall down into it, which may cause further matches and removals, and any remaining space at the top of the grid is filled with newly generated random symbols.

The win condition for this minigame is not explained in-game, and players initially passed it by brute force. A postmortem developer post revealed that the win condition is to match five brains in a row.

Upon winning the minigame, the third Inconspicuous Note will appear next to the Mind Larva on the altar. It reads:

The note was interpreted as a hint towards Deepholm.

The Crumbling Depths, a cave in the north-east corner of Deepholm's lower reaches, contains a "dark fissure" that is only visible to players who have completed the previous step. Clicking it will alert the player that there is no exit before allowing you to enter. Inside is a single stone chair, or seat, as described in the previous Inconspicuous Note. There is a skull upon the seat, along with a Dingy Plaque on its back.

The Dingy Plaque's text is different in every localization. In English, it reads as follows: 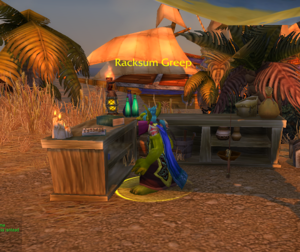 Racksum Greep, who can be found in Ratchet at coordinates (69, 70)

While the English text contains only complete words, other languages contained nonsense fragments, which suggested the presence of an anagram. Attempting to locate one led to the partial discovery of the phrase the key is along with the letters ACEEGKMPUSRR. Comparison to the German translation revealed that subtracting the equivalent phrase der Schlüssel ist from that language's text left the same set of letters, implying that anagramming was likely the correct approach.

On the second day of puzzle solving, the full anagram was discovered to be RACKSUM GREEP IS THE KEY. Racksum Greep is a goblin NPC in Ratchet, who can be found at coordinates (69,70) in the Northern Barrens. The anagram was validated in all other languages, despite the varying localizations of the ciphertext and the differences in the NPC's name.

Racksum Greep is wearing a specific mask necessary to progress: the craftable Shadoweave Mask. While the pattern for this mask was removed in a prior expansion, as of patch 7.3, the pattern now drops from Dark Iron Steamsmiths in Searing Gorge. Upon returning to the dark fissure in Deepholm with the Mask equipped, the skull on the chair becomes interactable. (The other items worn by Greep have no effect, and the prior removal of the mask's pattern may have been a hint as to its special relevance.)

Many players have encountered various temporary bugs at this step. Be sure that:

If you are still having issues, try reloading your interface or relogging.

Using the skull while wearing the Shadoweave Mask causes a large purple explosion, and spawns the fourth Inconspicuous Note at the foot of the chair, which reads:

The shaded delegate is a reference to a rare spawn called the Dark Iron Ambassador, who may appear in Gnomeregan. 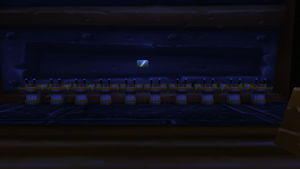 The levers in Gnomeregan

After interacting with the fourth Inconspicuous Note, a set of 10 consoles becomes interactable in Gnomeregan, at coordinates (37, 55), on the Launch Bay floor of the dungeon map, between the Launch Bay and Engineering Labs. Each console holds a digit from 1 to 9 (excluding 0), and offers dialog options to increase or decrease its value by one.

Near the levers is a plaque with a set of encoded "instructions" that vary along with the client's locale. Most locales have a ciphertext that contains mostly 5, 8, or 24 digit-long "words" in binary. However, in the zhTW locale, the text instead contains digits on the range [1,5] rather than binary.

In English, the binary text reads: 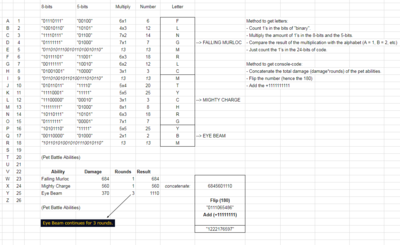 The solving process for the binary instructions

These numbers can then be translated into letters, based on the positions of letters in the alphabet:

The next line of the instructions, 180, is a clue to reverse this number:

Setting the consoles to 1222176597 by repeatedly interacting with them causes the fifth Inconspicuous Note to spawn, which reads as follows:

This was interpreted as a clue towards Val'Sharah. 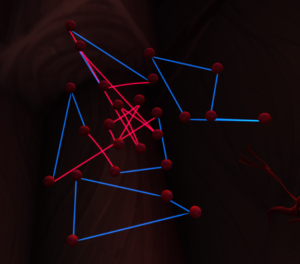 The "untangling" minigame, found at coordinates (66, 36) of Val'sharah

At coordinates (66, 36) in Val'sharah, an interactable Nightmare Tumour was discovered. Activating the Tumour causes a synapse-like organism bearing the name of the Old God Il'gynoth to appear, and say:

Additionally, using the Tumour commences a minigame that follows the rules of Blingtron's Circuit Design Tutorial. The minigame begins with a number of randomly-positioned points, which are each connected to two other points by line segments. Any two points can be swapped, moving their attached line segments with them. Line segments that do not intersect any others are colored blue, while those that do intersect are red.

The objective of this minigame is to turn all of the line segments blue, by "untangling" all the lines and vertices. Here is an example solution: 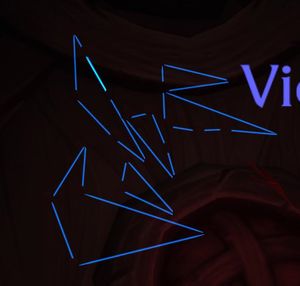 Once all the lines have turned blue, the sixth Inconspicuous Note appears in front of the tumour:

This was determined to lead towards the Tomb of Secrets, in the Valley of Emperors in Kun-Lai Summit. 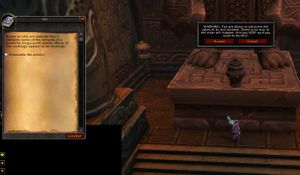 The ashes found at coordinates (53, 49) of Kun-Lai Summit 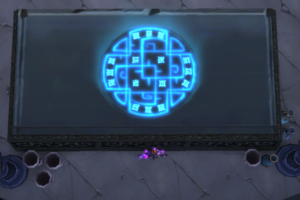 A blue rune on a table in Endless Halls 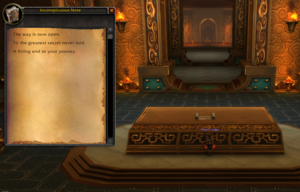 The seventh inconspicuous note, found after solving the maze

At coordinates (53, 49) of Kun-Lai Summit, an urn of ashes was discovered at the base of a Mogu statue. Interacting with the urn yields an option to consume the ashes. Selecting this option brings up a prompt:

Clicking "Accept" teleports the player to a square room in Endless Halls, a randomly generated maze puzzle. Each room contains an altar ringed by torches and a doorway in each of the cardinal directions. Every room is visually identical, except for three details: rubble may block some exits, the torches at the altar may be lit with a colored flame, and there may be a colored rune on the altar. The torches and runes may be red, yellow, green, blue, or purple.

To solve the maze, the player needs to click a torch of each color to acquire that color's orb, and bring it to the matching rune. Only one color of orb may be carried at once, and once delivered, the rune vanishes.

Several mechanics make navigating this maze the most difficult part of the trail:

Exiting the room after placing an orb at all 5 runes takes the player to a final room, where the seventh Inconspicuous Note is lying on an altar:

The note was a hint towards the Forgotten Crypt, a well-known and partially completed area next to Karazhan. The Crypt has existed from the game's earliest releases, but was never completed or opened, although it has been previously explored via exploits. 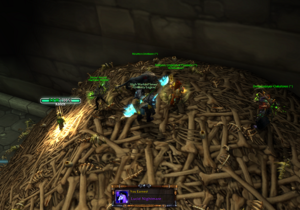 Looting the mount in the Forgotten Crypts

After activating the seventh Inconspicuous Note, the entire Forgotten Crypt is permanently opened for the player character. It is located behind the graveyard at Karazhan, at coordinates (37, 75) in Deadwind Pass. One chamber deep within contains a large mound of bones. There is a box on top of the pile of bones; opening it sets off a fireworks sound effect and yields the Lucid Nightmare mount.

Some other quests may temporarily interfere with the player's ability to acquire the mount at this final step. In particular, the quest for the Affliction warlock hidden appearance is known to change the phase of Deadwind Pass, causing the chest to be invisible. Either completing or abandoning such quests should cause the chest to appear. 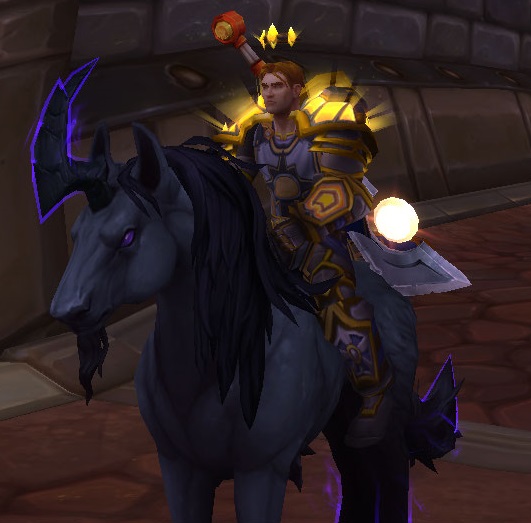 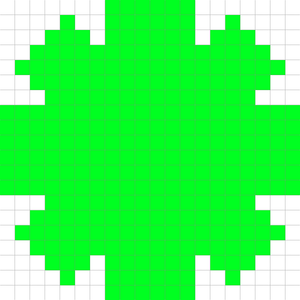 The correct pattern for the second step, in Ulduar.

A sample output for the tracking script

For players more interested in acquiring the mount than the explanations and history of its discovery, follow these steps:

Players can track their progress by running this script: