On the first full day of San Diego Comic-Con (July 20, 2017), attendees were exposed to promotional posters for Ecoin. These posters led players to http://e-coin.com. According to the posters and the website, Ecoin is a new cryptocurrency created by E Corp, a company in the Mr. Robot universe. By creating an account on the Ecoin website, ARG players are able to view promotional offers and enter promotional codes.

The bottom of the Ecoin poster

One of the Ecoin posters at SDCC had the following message:

By examining every second letter of the ciphertext, the following message is revealed:

Using the promo code ENLIGHTENMENT on the Ecoin site reveals a hidden message, advising ARG players to apply for a job at Red Wheelbarrow.

More information on the SDCC event can be found in these Reddit posts: 1, 2 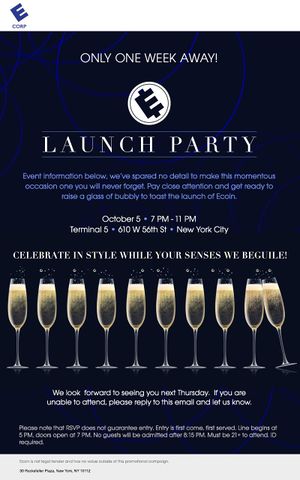 On September 28, 2017, an invitation email was sent out to players subscribed to the mailing list. The invitation describes an Ecoin launch party, to be held on October 5. However, the email also contained a hidden message. The letters above each large bubble of champagne spelled out the message:

By navigating to bit.ly/sewgi, players were redirected to the RSVP page for the Ecoin launch party. At the bottom of this page, the following image was found:

The image above spells out SILENT SIN in Moon alphabet. After responding to the RSVP page with SILENT SIN, the RSVP page's appearance completely changed, and displayed the following message: 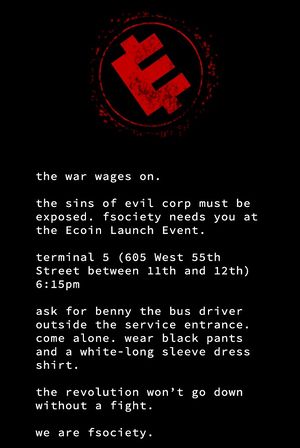 Players who entered their email addresses received the following email from fsociety, the underground network of hackers: 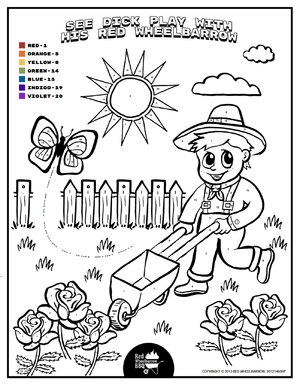 The color by numbers page found on the Red Wheelbarrow site

On the day prior to the Ecoin launch event, several websites which were used earlier in the ARG were updated.

The Red Wheelbarrow site was updated with an entirely new site layout, along with a kids section. The "color by numbers" printout in the kids section contained several hidden messages.

The path traced by the butterfly is actually Morse code:

The numbers in the sun, when converted to letters using a simple substitution cipher, reveal the following message:

The numbers in the butterfly's wings, when converted to letters using the same cipher, reveal the following message: 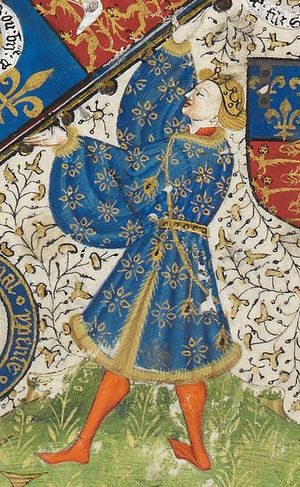 Running the file through exiftool, a thumbnail image was found. 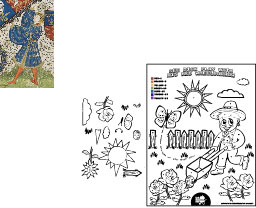 Notable is the image in the upper left, which is a low res picture of Richard of York, shown at right. Also known as Richard Plantagenet (RP), he fought in the War of the Roses in England on the side of the White Rose, and died in battle on 30 December 1460. The date of his death and initials match the notation at the bottom of the PDF "30121460RP".

A mnemonic used to remember the colors of the rainbow, "Richard Of York Gave Battle In Vain", is also a hint in the puzzle number color key to the hidden image.

Nothing of interest has been found yet in the Spot the Difference PDF.

The Confictura site was also updated with a new quote in a hidden area, last accessed earlier in the ARG. The hidden quote can be uncovered as follows:

This message is a quote from Lewis Carroll's Alice's Adventures in Wonderland.

(Note: the codes 0736565 and blackanddeepdesires were discovered earlier in the ARG.)

Finally, using the promo code ENLIGHTENMENT on the Ecoin site now reveals a different message than before:

A quote often misattributed to Abraham Lincoln, but actually by Ella Wheeler Wilcox. 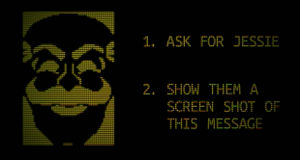 A screenshot of the Snapchat video

An hour before the event was scheduled to start, ARG players boarded the fsociety bus to the Ecoin launch party. Swag bags were distributed, some of which contained a physical Snapchat Snapcode. Scanning the Snapcode led to this URL, which plays a video automatically. Different participants received different Snapcodes, which led to different videos.

In addition to the Snapcodes, some players received handwritten notes, like the one below: 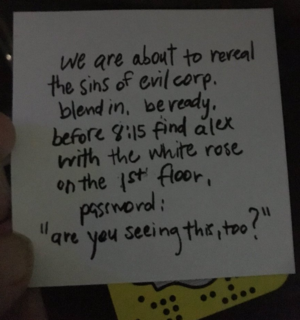 As well, some players were tweeted directives by the official Mr. Robot Twitter. These directives were targeted at ARG players who had used the hashtag WeAreFSociety. Some sample tweets are listed below: 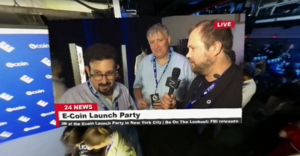 At 7:30 EST, the official live stream on Mr. Robot's Facebook page went live, with 360 video providing full coverage of the event. The 360 footage was interspersed with footage of 2 interviewers, one male and one female, interviewing guests at the event. Both the interviewers and guests were actors, and provided some brief exposition about E Corp and the hacker group fsociety, as well as the fictional "Five-Nine" attacks, which spurred the development of Ecoin as a cryptocurrency.

At 8:00 EST, E Corp's VP of Public Relations took the stage to welcome the attendees to the party. Shortly afterwards, the following image appeared on the livestream: 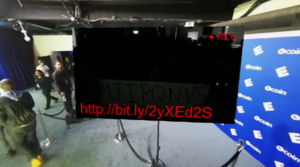 Visiting bit.ly/2yXEd2S led to a form where ARG players could fill out their mail address, along with the code MJIPQNVS (visible in the image above) to receive an FSociety mask. Shortly after, another bit.ly link and code appeared on the screen, leading to an identical site. 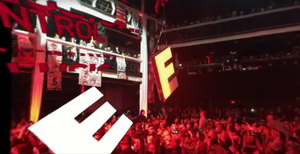 The livestream immediately before it ended

At 8:30 EST, a promotional video for Ecoin was played in front of the audience, and Philip Price, the CEO of E Corp, took the stage:

Price's speech was interrupted, and glitching effects began to play on the live stream, reading "HELLO FRIEND" and "CONTROL IS AN ILLUSION". At the same time, the lights in the venue went stark red, and fsociety banners were unfurled from the balconies, as some audience members put on fsociety masks. Finally, the giant capital E suspended in the air was lowered to the ground, before the video feed was cut.