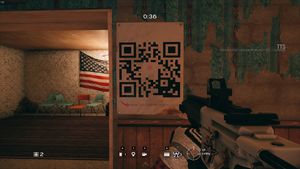 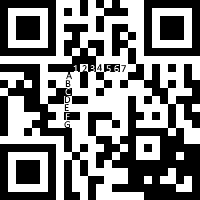 The characters C4, found on the QR code itself, form one of the coordinate locations on the QR code grid that need to be filled in. Scattered throughout the map are other small bits of paper with other coordinates listed on them. The locations of each of these notes can be found here. Here is the complete list: 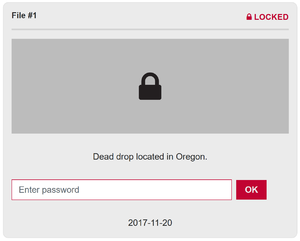 On January 23, 2018, the RainbowLeaks site was updated to include File 3, whose description read Dead drop located in Kafe Dostoyevsky.

The same day, the game was updated. Players discovered notes hidden on the Kafe Dostoyevsky map:

Looking at the underlined numbers and the letters on some of the notes, players deduced that the numbers are a book cipher, to be used on the 1st part of the Launch game guide on the Rainbow Six Siege website. Taking the first number for the page of the guide, the second for the line on said page and the third for character in that line, players used the numbers on the notes in the order seen above and got the following string:

This string turned out to be the solution to the file's password.

Inside the file was the following text:

A voice file, containing a recording of a message for a woman of the name Alicia by a man called Kevin, describing his trek into a quatantined area and the infection within. Transcript below:

5 images were also included in the file:

The fourth image contained a witness report of a evacuation squad being hit by something that completely destroyed a Hummer:

The fifth document contained a transcript of a conversation via SMS between two men, one named Frank (yellow tag) and another named Gene (blue tag). Transcript below:

On February 9, 2018, the following message appeared on the RainbowLeaks site:

With that, the RainbowLeaks ARG was concluded.