This article uses material from the Runestone basalt article on the Oldschool RuneScape Wiki and is licensed under the Creative Commons BY-NC-SA 3.0 license.

Runestone basalts with a card on top have been found scattered across the Shattered Relics League worlds. Upon interacting with these stones they displayed a message to the player saying "You reach for the card but it fades before you can grab it... as if pulled into another realm..." and opened up a cryptic image in the player's browser. After interacting with the basalt, the card disappears and further searches of the basalt now display a message saying "A faint warm glow can be felt where the card once was... I wonder where it went?". 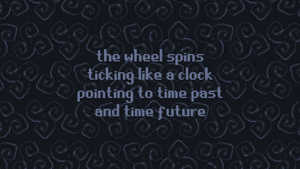 The first runestone basalt was found near the Lighthouse, north of the Barbarian Outpost. Interacting with the basalt opened up a cryptic image in the player's browser. Hidden in the background of the image were the letters FHXSPLZLOUCUGS. The file name of the image is jato5xu7a4. Converting the numbers in the file name to letters (A=1, B=2, Z=26, etc), it becomes jatoexugad. Using this as a key in a Vigenere cipher with the string hidden in the image as the ciphertext, it decodes to WHEEL OF FORTUNE. 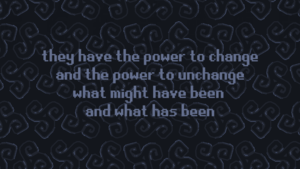 The second runestone basalt was found on Harmony Island, south of Mos Le'Harmless. Interacting with the basalt opened up a cryptic image in the player's browser. Hidden in the background of the image were the Chinese characters 暗輪鑰謎蠱籠間. By counting the amount of strokes in each character, and then converting the numbers to letters using the same technique as before, it produced the string MOYQWVL. Once again using this string as the ciphertext, and the file name thumbnaillarge as the key for the Vigenere cipher produced the phrase THE EVIL. 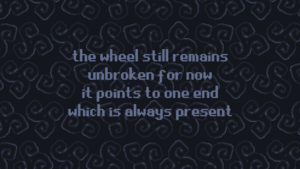 The third and currently final runestone basalt was found in Great Kourend, in the continent of Zeah. Interacting with the basalt opened up a cryptic image in the player's browser. Hidden throughout the image were seven dark cyan pixels. These pixels could be found in the image in the following X and Y coordinates (146, 85), (500, 100), (312, 301), (1271, 111), (1420, 500), (1122, 341), and (816, 522). Going from left to right, by adding all of the digits in the X and Y coordinates together, and once again converting these seven digits alphabetically from numbers to letters, produced the string XJFXNLN. The file's name 5c2s0xcwug could also be decoded using the same method (with '0' recursively becoming 'Z') to get the key ECBSZXCWUG. Finally, using the string hidden in the image as the ciphertext, and the converted file name as the key for the Vigenere cipher, produced the string THE FOOL.

After all of the Runestone basalt puzzles were solved by the community, the images found near the Lighthouse, Harmony Island, and Great Kourend, were updated to contain the decoded phrases. As show in the photos, players are currently on standby for further messages. Additionally, hidden in the background of these updated images is the message seriously just wait.

On the 8th February 2022 the image redirect for the Lighthouse basalt was updated. The new image contained the clue "follow the sound of the flowing river" alongside an unusual cyan border. The solution for this puzzle is not yet known.

"follow the sound of the flowing river"
Retrieved from "https://wiki.gamedetectives.net/index.php?title=Runestone_Basalt&oldid=20104"
Categories: