The ARG is taking place on the Next Frictional Game website, mostly comprised of finding YouTube IDs by solving puzzles hidden within the site.

Throughout this article, information has been taken from this Google doc.

Since 10/12/2019, one second videos of a growing embryo are uploaded bi-weekly to the Next Frictional Game website. The name of each video represented the date the video was posted on, in this format: mm/dd.
Each video got deleted from the site after being replaced by a new one. 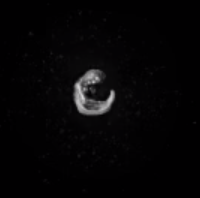 On 23/01/2020, a new eye icon was spotted at the bottom right of the website, along with the other social media icons.
Hovering on the icon reveals a YouTube video ID suWaF-aIdV4 which leads to a video named Box 52, Tape 16.

The HTML code of the site was inspected as well, and another YouTube video ID pBW3V85Y-I4 was found inside an element named artefact.
The ID leads to a video named Box 7 Reel 2, Partial Success

The video shows a collection of rocks near a body of water, and then zooms in on a rock with peculiar symbols craved on it. The description of the video mentioned it's a cassette marked Shetpe, KSSR.

A notable location regarding the mentioned location in the video is Sherkala, A mountain located near the town of Shetpe.
It is the remains of medieval caravanserai. Tunnels were built inside the mountain during a besiege.

Nothing can be seen in the video, but three monstrous screams can be heard.
The description describes this video as an artefact, which is marked Triple Crown.

On 29/01/2020, a hidden text was added to the site that was discovered by highlighting the lower part of the website.
The text reads Exxpedition: frrequenncy oof raddioo 78.3 short WWave seQQuence.

By putting together the double letters and the numbers, we get: xrnodo783WQ. This served as a YouTube video ID which lead to the video Box 12, Recent Acquisitions.

The video takes place in Salzburg, Austria, in an expedition site. The person in the video wears a bracelet with a black feather on it.
A note can be found inside the ammunition box. The transcript of the note is as follows:

A notable location regarding the mentioned location in the video is the Salzburg Catacombs, which include ancient christian underground tunnel systems.

On 04/02/2020, a new element was added to HTML page code, named transmission.
By adding /transmission to the site url, a file can be downloaded.
After a .wav extension was added to the filename, the file could be opened.

Upon opening the file, an audio that resembles morse code is played.
The morse code was translated to V0FFI3DDMXXWH4.

By treating the double letters as uppercase and the rest as lower case, we get v0Fi3DmXwh4,
which results in the YouTube ID for the video Box 11, recent acquisitions.

The video takes place in Saint-Denis, Paris, in an old workshop.

The person in the video is seen operating a short wave radio, which plays an ominous sound of a person singing the song "See Saw Margery Daw".

Cover note translation: "Only with this old radio and in this specific place."

A notable location regarding the mentioned location in the video is the Paris Catacombs, which include ancient underground tunnel systems. 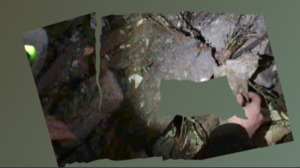 Result of the re-arranged image pieces.

On 13/02/2020, a new button named Press Kit was added to the site.
The button lead to a google drive folder, which contains sub-folders for each of Frictional's games.
Inside the unannounced folder, another folder was found, which contains 11 image files. The name of each file is made of one letter.

The images were placed together and formed an incomplete image.
The names of each photo were put together from top-left to bottom-right, and resulted in: 1KaDkmxsvTo, which is the YouTube ID for the video Box 12, Recent Acquisitions (Card 3)

The video takes place in Algeciras, Spain, in an ex-warehouse, previously owned by different people.

A Twanas-looking artifact made of sticks with feathers can be seen.
A golden ring is located inside the artifact, with symbols craved on it.
Too much light is reflected from the ring to get a good look at the symbols.

Using the substitution cipher rules, the text was deciphered and revealed the following message:

Cassandra is a reference to the character from the Greek mythology.

The video shows a person walking with a compass towards the "black broken stones of a substance unknown" from the cryptic message.
When they reach near the black stones, the compass starts to show anomalous behavior, and the video feed cuts.

On 28/02/2020, 11 letters and symbols were scattered across the internet, mainly in Frictional's social media sites:


In addition, a new entry appeared in the HTML code, which consists of 11 lines short story.
The letters were matched with the sentences by associating the meaning of the sentences to the symbols attached to the letters. The result was:

Combining the letters in order from top to bottom, results in the YouTube ID 1AKyIjYlcFo, which led to the video "i am Tasi"

This is the first video that provides in-game footage.
It the protagonist of the game is called Tasi, a seemingly middle-eastern female. Tasi is looking for someone.

Tasi experiences something anomalous which makes her to reassure herself she is in fact still her, and not something else.

On 06/03/2020, The ARG ended and Frictional Games revealed their new title - Amnesia: Rebirth.