Most of the information on this wiki page was taken from this guide, written by Super.

The Sun Darter Hatchling is a secret pet hidden in World of Warcraft, made by Blizzard Entertainment. The Hatchling is found at the back of the Cavern of Consumption, which contains several puzzles. Failing one of these puzzles will either impede your progress, or reset your progress outright, so make sure to follow this guide diligently!

The primary solving hub for this puzzle was the WoW General Secret Finding Discord.

In order to solve all the puzzles in the Cavern of Consumption, players require several consumable items. Here is the complete list:

On June 16, 2017, the Cave of Consumption was discovered along the north coast of Winterspring, at coordinates (57, 16). Upon entering the cave, players are immediately confronted with the first puzzle. 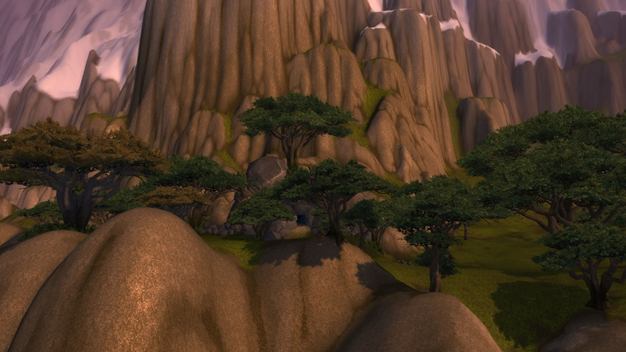 The entrance to the Cave of Consumption, at coordinates (57, 16) in Winterspring 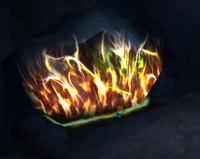 The fire and fel barriers

The first puzzle players encounter in the Cave of Consumption consists of two elemental barriers: a fire barrier, and a fel barrier. By using a Major Fire Protection Potion, players are able to pass through the fire barrier unhindered. Since fel magic is comprised of all schools of magic, the fel barrier can be bypassed by drinking the other 5 types of Major Protection Potions (Arcane, Frost, Holy, Nature, and Shadow). 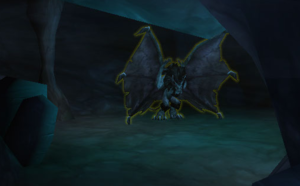 Beyond the elemental gates, there is a stone gargoyle named Diligent Watcher. Attempting to cross its path, which the player must do to continue deeper into the cave, will instantly teleport the player outside of the cave.

In the next section of the cave, the path splits: one tunnel is covered with impassable vines, and the other is blocked by a blue water barrier. Using a Scotty's Lucky Coin charge will transform the player's character, and attune them with the vines. In this form, the player is able to pass through the vines to the room beyond.

Behind the vines, there is a pool of water which contains several Water Stones. Collecting one and using it adds the Wet buff to the player character, which lasts for 15 minutes.

This buff allows the player character to pass through the blue water barrier, and continue deeper into the cave.

After passing through the water barrier, the next room in the cave contains a Stone Golem. Much like the Diligent Watcher before it, trying to cross in front of the Stone Golem will teleport the player outside the cave.

Consuming a Dire Brew to change the player's appearance into that of a Dark Iron Dwarf allows the player to pass the Stone Golem. One theory explaining this puzzle is that, according to dwarven lore, dwarves were once made of stone before they were made of flesh.

At this point in the cave, the path branches - a ramp leads downwards, and another ramp leads upwards. The downwards ramp leads towards the Sun Darter Hatchling's egg, but before the egg can be looted, more puzzles must be completed.

At the top of the upward ramp, the path forks yet again, into a room on the left (the "Wisdom Cube room") and a room on the right (the "Strange Stone room"). 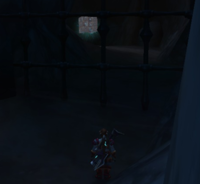 After heading up the ramp and taking a left, there is an interactable Wisdom Cube hidden behind a gate. The holes in this gate are large enough that a sufficiently small character model can sneak through them. By drinking Pygmy Oil to turn into a gnome, a player can reach the cube. Interacting with the cube yields the following riddle:

The amusing heir the Wisdom Cube is referring to is the Perky Pug wearing the "Little Princess" Costume; summon the Perky Pug and use the costume.

Interacting with the cube now reveals the following option:

Choosing this option grants the player with a buff, Mark of the First, which is required to loot the Sun Darter Hatchling's egg.

After heading up the ramp and taking a right, there is a room guarded by an Ethereal Barrier. Accordingly, drinking Ethereal Oil allows the player character to pass to the room beyond.

The room after the Ethereal Barrier contains a Strange Stone, with a conspicuous hole. The objective of this room is to grow the player character's arm to fit the hole by using consumables to increase the size of the player model. This can be accomplished by using a Gordok Ogre Suit and a Winterfall Firewater.

After interacting with the Strange Stone, the player is granted a buff, Mark of the Second, which is required to loot the Sun Darter Hatchling's egg. 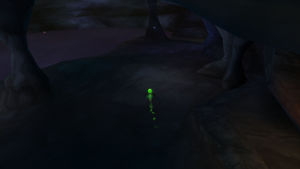 The room in which the Sun Darter Hatchling egg is found

After solving either the Wisdom Cube or Strange Stone, the room at the base of the downwards ramp is unlocked. Inside this room, the Sun Darter Hatchling's egg rests across a body of water. However, touching the body of water teleports the player outside of the cave. Both the Mark of the First and the Mark of the Second buffs are required to reach the pet.

Additionally, there is a plaque on a pillar, which reads as follows:

The smallest leap of the mind refers to a Level 1 Scroll of Intellect. Using this scroll will allow the player character to cross the water unhindered.

Note: You may have to right-click to cancel some of your existing buffs in order to use the Level 1 Scroll of Intellect - it is safe to do so at this point. Also, some players have reported failing the puzzle despite having used the Scroll of Intellect. To prevent this, hug the right wall of the cave. 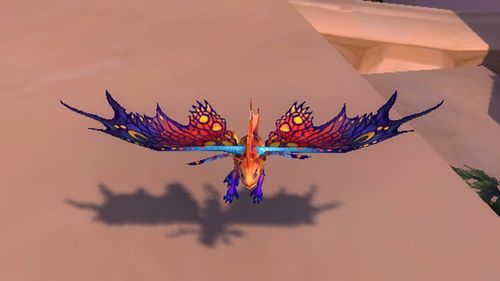 The in-game appearance of the Sun Darter Hatchling

Players who want to loot the pet quickly can use this concise guide: