From Game Detectives Wiki
< THE VAULT
Jump to: navigation, search

Main Page > List of Investigations > THE VAULT > Chapter One

Note: This page contains the complete outline of Chapter One of The Vault 2 ARG. If you just want a brief summary of completed chapters and to see the current Ongoing Investigations, check out the main The Vault page.

Chapter One began on Oct. 31, 2018 with a transmission from Doc in the Discord Server. During Chapter One, Heroes discovered the Vote for Doc campaign website which was the nerve center for future clues and crucial information. The website was also the location for the main objective of getting Doc 100 Million Votes. 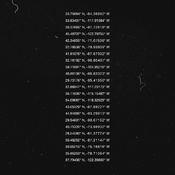 On Oct. 31, 2018, the Heroes received the following transmission from Doc in the Discord Server, announcing his campaign for Galactic Mayor:

The 23 GPS coordinates in the image corresponded to FedEx locations around the United States. Heroes retrieved online print orders under the name “Mayor Doc” from the FedEx Print Centers. 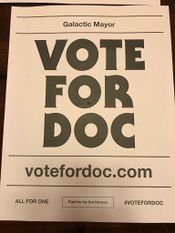 Page 1 of the Campaign Materials 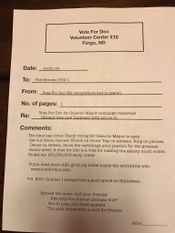 The campaign materials contained two pages with four clues: (1) the Vote for Doc campaign website, (2) the volunteer center number, (3) a phone number on the envelope of the print order, and (4) the “Spread the news” riddle. The Vote for Doc website included the same list of FedEx locations, corresponding to the GPS coordinates in the transmission image, but with the addition of a FedEx Print Center in Bellevue, WA. The website included the following message:

Each location contained nearly identical campaign materials. Each were labeled with a unique Volunteer Center number. Heroes retrieved 10 of the packets and were able to call the remaining FedEx Print Centers, asking them to read off the numbers. All the retrieved campaign materials.

The Volunteer Center numbers, when assembled in the order of the GPS coordinates, spelled out the following list of numbers and letters: H1!441ND7431NV174710NF1ND443431PPL34S3!

“You must append the path below” referred to adding a path to the URL of the Vote for Doc website using the "/docs_______" and "a card for friends" (also known as an “invitation”). Therefore, the Heroes found: https://votefordoc.com/docsinvitation which contained a video from Doc.

Note: As of Nov. 20, 2018, the invitation video moved to https://votefordoc.com/invitation.

On Nov. 05, 2018, the Heroes recruited enough allies to power the ship to 700. This increase in power allowed the Heroes to upgrade the ship and bring the radar system online. The radar system unlocked the !jam command in #ship_commands. After some trial and error, the Heroes determined that having a large group of Heroes use the !jam command at the same time (in a 5 minute window) created an exponential jump in votes on Doc's website. Heroes met nightly at 01:00 UTC and were able to increase the vote count to over 16 million in less than 2 weeks.

On Nov. 06, 2018, the Heroes received another transmission from Doc, announcing 28 new FedEx locations and more materials at all locations. The new locations were notified to not reveal information over the phone. The transmission was:

The Heroes collected 38 out of the 52 packets. All the retrieved DocLetter 001 packets from: Location 1 to 24 and Location 25 to 52. DocLetter 001 contained 3 pages. Each packet contained a unique recipe for “Fungus Pulmenti Turtur” on page 2 and one of the four floors of a Roman Maze on page 3.

Each recipe for “Fungus Pulmenti Turtur” had different ingredient values, with the fourth step in the instructions either being “Cook” (in English) or “Coquere” (in Latin). All the retrieved recipes values.

These recipe values matched the values of the decimal and Roman numerals found in the Roman Maze path.

Path of the Roman Maze

Each third page of DocLetter 001 contained one of the four floors of a Roman Maze. The floor was determined by the icon in the top left corner of the page. Each floor was connected with up and down staircases throughout the maze. The Heroes found the path from the entrance on Floor 1 (bottom) to the exit on Floor 4 (top). Roman Maze solution.

The path contained a mixture of binary, decimal, and Roman numerals (from Bottom to Top):

This clue was also meant to motivate the Heroes to recruit more players from other ARGs who could help us solve puzzles.

The Heroes were still struggling with how to use this new clue to solve the Roman maze, so another set of clues was given.

The first three Heroes to reach Level 20 in the Discord Server were given special "Celestial Commands" they could use in the #ship_commands channel that would return hints and helpful links to recruit more heroes. These commands were !ru, !1313, !:feet:, and !000.

The !1313 command returned a group of hints under the clue POWER. None of these clues pertained to the Roman maze. They were all links to other ARGs/puzzle solving groups on Discord and Reddit meant to motivate the Heroes to recruit more allies to power the ship.

The !:feet: command returned a group of hints under the clue SOUNDS. The hints returned were a group of sound files (__.wav, ___.wav, ____.wav, and !.wav) that when ran through a spectrogram, spelled out "MAZES FOLLOW THE CONVERSE".

This message from Dampé meant that he sent online print orders to the FedEx locations where the English/Latin word of “Cook”/“Coquere” in the fourth step of the recipe did not match with how the number was expressed in the Roman Maze path (in decimal or Roman numerals). This assumed that “Cook” (English) matched with decimal numbers and “Coquere” (Latin) matched with Roman numerals.

The Heroes collected seven of the ten letters and found four more clues, as seen in the table below. All the retrieved Dampé Webmaster letters.

Each clue pointed to new URL paths which contained pieces of a new Roman Maze.

Using the clues from Dampé, the following URLs were found:

The Heroes used the same methodology to solve these new Roman Mazes and picked out the capital letters in the path (disregarding the start of sentences).

This following path was a reference to World of Warcraft as a quote from Blessing of the Bronze Aspect by Aman'Thul:

“Unto you is charged the great taSk of keeping the puriTy of timE. Know that thAre is only one true timeLine, though there are those who woulD have it Otherwise. You must proteCt it. Without the truth of time as it iS meant to unfold, more will be lost than you can Possibly imAgine. The fabric of reality will unravel. It iS a heavy taSk--the base of all tasks of this WORlD, for nothing can transpire without time.”

The capital letters (shown in bold) led the Heroes to https://votefordoc.com/STEALDOCSPASSWORD which gave them access to Doc’s email address: [email protected]

After hacking into Doc's email on Nov. 16, 2018, the Heroes borrowed Doc’s Premium Galactic TV account subscription and were able to watch premium videos by using the !premium command in #galactic_tv.

Hacking the Shields with Terminals

On Nov. 17, 2018, the Vote for Doc website was hacked by his competitor Robert Baron. The original method of collectively using the !jam command to increase the vote counter was no longer an option. The Heroes voted for FURY to switch power over from the radar system to the tactical system. This gave the Heroes the ability to hack the shield using terminals.

The Heroes used the !hack command in #ship_commands. MEE6 showed the way to the first terminal: https://votefordoc.com/terminal10_000001_1

The link led to an open Terminal. The Power number increased with the number of Heroes simultaneously viewing the page.

With ten Heroes on the website at the same time, the popup message !hack000 unlocked appeared. The source file of the message originated from: https://votefordoc.com/hacks4heroes.json.

Using the !hack000 command in #ship_commands returned the following response from [LANTERN]:

The link led to a box-pushing puzzle game called “Hack the Shield!”. The controls were “X” to select and the arrow keys to move.

Beating the game led to the following screen. “X” restarted the game.

The link on the Success screen led to a closed terminal. Looking in the source code, the terminal was only open between 01:00 to 03:00 UTC. With 50 heroes on the website at the same time, the popup message New !hack built! appeared. The source file of the message originated from: https://votefordoc.com/hacking4heroes.json.

Using the !hack17136 command in #ship_commands returned the following response from [LANTERN]:

The link led to another box-pushing puzzle game.

Beating the game led to the following screen. “X” restarted the game.

The link on the Success screen led to another terminal which only opened between 01:00 to 03:00 UTC. With 100 heroes on the website at the same time, the popup message Two hacks out of six powered. Now !hack on Heroes! appeared. The source file of the message originated from: https://votefordoc.com/hacking4heroez.json.

Using the !hack1079568 command in #ship_commands returned the following response from [LANTERN]: