The Magic Circle is a game developed by Question. It was released on Steam on 9 Jun. 2015. It contained an eye sigil, making it part of the Eye Sigil ARG.

Sigil appears on the door of an airlock, as seen in this video. 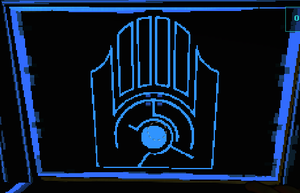 Once the player exits the airlock with the sigil and gets on top of the room, they see the puzzle piece as a 3D model hovering there in mid-air.

This is one method to use to get up there.

It's probably possible to use anything else as stepping stones for this, not just rocks.

There is another way to do this. This method is shown in the video. 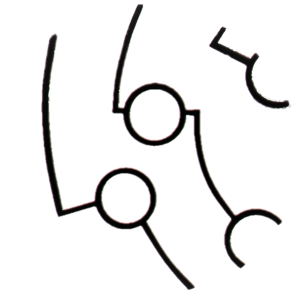 The airlock and the piece were first discovered by the players of The Magic Circle community on 14 Jul. 2015 and deemed a pointless thing or a lost asset.

The sigil is stored in the game as a texture DoorSymbol_DIF.tex