The Wilson Wolfe Affair is an ARG by Simulacra Games, created to coincide with their upcoming game of the same name. It heavily revolves around a package of old school memorabilia that gets delivered to participants, which secretly hides puzzles that will advance the ARG.

On September 26th, 2017, the Simulacra Games YouTube channel posted this video titled "Mad Scientist Wilson" to promote their upcoming game "The Winston Wolfe Affair." In addition, their social media accounts tweeted an unboxing gif, which explained the story of the ARG and the types of puzzles to expect.

One player discovered that the audio of the Mad Scientist Wilson video was a reversed, raspy voice telling a message, which is believed to be:

The players puzzled over what the relevance of the message could be, but were ultimately left in the dark. However, other anomalies also were uncovered in the video. 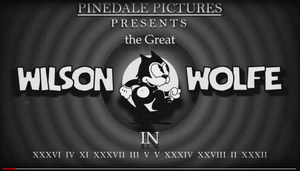 Roman numerals pictured at the beginning of 0:34 in Mad Scientist Winston Wolfe 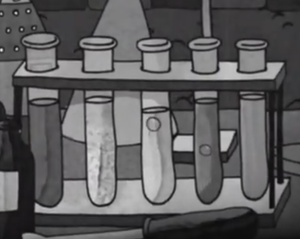 Bubbles rising in a tube (pictured left) seen at the 0:41 - 1:04 mark in the Mad Scientist video represent 5-bit code. If each empty tube is read as 0 and each bubbling tube as 1, the code reads:

Roman numerals seen at the intro of the video (pictured right) can be indexed to letters on the title screen and ending screen (ie 36th letter is the S in WILSON, the 4th is the E in PINEDALE, etc. the 9th letter is the first I in SCIENTIST, the 38th is the S in JINKS). This yields: 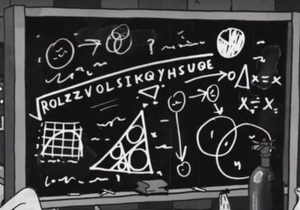 Text string pictured on the blackboard at 0:34 in Mad Scientist Winston Wolfe 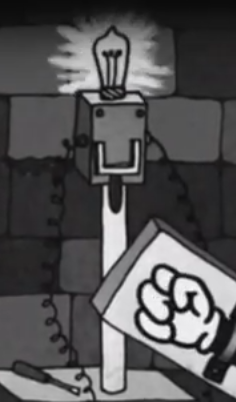 Morse code flashed by a light starting at 0:38 in Mad Scientist Winston Wolfe

Morse code is flashed from a light starting at 0:38 (pictured left), which decodes to:

The blackboard at 0:34 (pictured right) displayed some mathematical formulas as well as a string of text:

Players pondered over the key, noticing a series of alchemy bottles seen on a table as the camera pans right in the video. The "lion elixir" in alchemy is related to an elixir of eternal life. One of the main goals of alchemy was turning lead into gold. Plumbaginaceae is LEADwort, so the "Key" bottle would be some plant with GOLD in the name. The text string in a Vigenere cipher with keyword MARIGOLD yields:

Altogether, players were left with the numeric string 1-8-2-3. Astute players also noticed some text which (very quickly) scrolls vertically at the very end of the video. The first and last bits read Not for release and For in studio use only!, but a portion in the middle, written in a distinctly different font, reads:

The Spooky Salesman - The Second Video

On October 19, 2017, a new video was posted to the Simulacra Games Youtube channel, titled "The Spooky Salesman".

A tune is sung throughout the video, which players roughly transcribed to:

Reflecting on the lyrics, players were able to untangle various messages hidden in the song. The phonetic part of the song (starting with Ba ba) contains a message in the form of a cryptogram. If each "sound" it taken in pairs and assigned a letter (ie Ba ba = T, Ho hi = H, Hi ho = E, etc), the following message emerged:

In the final part of the video, a static-y woman's voice is heard. Players noticed that taking the first letter of each word the woman speak yielded HYNOTCOMBIEOMITTELETTS

Which, if the letters WONDER are added in the right spots, can be read as:

Two players discovered out of place frames containing text at 0:35 and 1:21(pictured below).

Both "letters" are stamped with the text "The Order of the Third Circle." Players discovered various messages hidden in these images.

The frame at 0:35 contains the text FXNHFDXXHNQMAIIIORXHFEYFETRSNTAWERXXOXXSXGQMILADBUTTTTXSELLMAORHHXHTEXSQEMNTEEFERCIOTXPEHXXRXEOSNHIXYXMBAOENXXISRAFAEMPXDOIRXARRNLEESXLNDTIDAXL

Players discovered that, when the text is organized into an 11 by 13 grid, the following message is revealed:

Applying Rot1 to the third letter of every word in the frame from 1:24 yielded:

Taking a hint from the frame order above, players pondered why the order in the video is different, going Tree shot --> Boneyard --> Man at Bell --> Hell.

The frames as they are described in the hidden message are shown below:

Players noticed that in the Graveyard scene, rain drops hit the gravestones on certain letters. These letters are AWTKX. Seeking a deciphered message, players applied the previously-obtained word Wonder to the string as the key in a Vigenere cipher. The text decodes to:

Given this order and reflecting back on the lyrics of the song that plays during the video, players made a breakthrough. Realizing that the lyrics "frame the same" were a clue, they overlayed each above frame with the picture frames that aren't famous paintings Winston is seen running past from 0:52 - 1:15. Below are the results of each overlay:

If only the content in the clown picture frame in each overlay is considered (highlighted in red), and the content is oriented as the clown is, letters can be determined. These letters spell out: 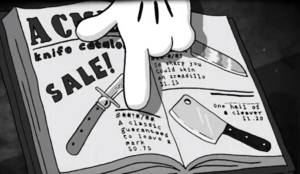 Knives Scene, which starts at 0:41 in The Spooky Salesman

The man also points at the garbage can and the bug in a later part of the video, but only for a single frame. Additionally, players noted that the door scene seems to spell the word "ROT". Given the 13 on the door, it is possible the scene is a hint to use ROT13 at some point.

Another noteworthy scene is the Knives scene (pictured left). Each knife's description is headed by a series of symbols except for the Cleaver, which has blank spaces where the symbols should be. Players were able to convert the symbols to numbers by using their previous Rot1 findings. Using the key dagger = three asterisk = one hash = zero pilcrow = four slash = nine dash = six, the following numbers were revealed:

Players recognized these numbers as dates, specifically 01/13/1911 and 01/16/1913. Players were able to connect these dates with the famous paintings seen from 0:52 - 1:15 as Winston runs down a hall. Each painting seen in this part of the video is vandalized with cartoon drawings - these paintings are real paintings which were vandalized, not by cartoon drawings, but by *knives*. Each vandalized painting corresponds with one date from the knives scene, with each painting matching the knife it was historically vandalized by. Since the butcher's knife did not have an enciphered date, the date can be determined by looking to history.

This makes the date corresponding to the butcher's knife 03/10/1914. Given the song lyrics "the third from the cleaver", players determined the number being referenced was 1. Players were left with the number sequence 1-8-4-9, as per the song lyrics. 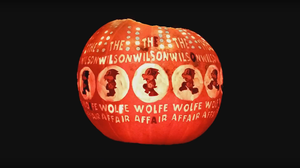 On October 27th, another video was added to the Simulacra channel titled "Wilson Wolfe Zoetrope Pumpkin for Halloween". The video features a carved, lit pumpkin zoetrope. Players quickly picked up on some of the pumpkin's quirks.

Carve Out The Truth

Immediately recognized were the dots at the top of the pumpkin, which appear as vertical sets of five. If the dots are read as 5-bit code where a bright dot is 1 and a normal dot is 0, the following message can be read:

Using these rules (Dark = Backwards, Bright = Forwards), players noted the bright and dark letters which appear on the pumpkin, then shifted them in the required direction by the number of the frame they occurred on (ie dark T first frame = S, dark H on third frame = E). This yielded:

As with the other videos, this leaves players with a number series, in this case 1-7-2-3.

This page is a work in progress and will be updated as the puzzle progresses.