On May 27th, 2017, Twitter user @argn tweeted a link to 'project-wt.com' - a website which contained a map with sixty locations, of which four were active at the time. The locations, when clicked on, reveal the location's name and its status. The active locations also reveal a link to a livestream of a local radio of that location. The website also displays a date, June 8th, and states that the first clue is being initialized. A list of active locations and their corresponding radio stations can be found here.

On the 8th of June, a broadcast was played on the radio stations displayed on project-wt.com at different times during the day. The voice in the transmission says

The first puzzle can be solved several ways, but the most apparent one is as follows:

The number 16 also appears in several other places: for instance, on a picture of a dossier hosted on the Waking Titan site. 16 is also the number of radio stations that were activated. Solving the puzzle causes a video to play. Several Discord users have attempted to transcribe the audio of the video:

After this puzzle is solved, clicking the second (top right) triangle shows a date, time, and radio station as well as an input box for email updates:

By clicking the second glyph on the bottom row, a second PDF file can be accessed, as well as a text entry box. The PDF file hinted towards a live drop that took place at 7:00PM that day, at Cafe Bene in New York City. 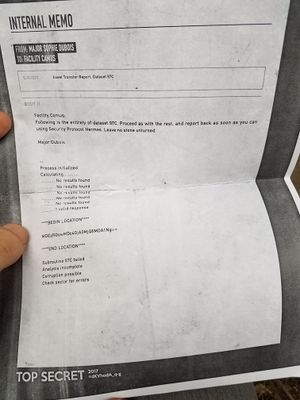 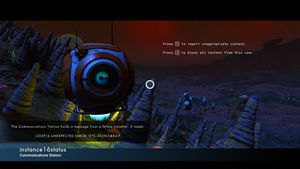 The base64 was No Man's Sky coordinates that lead to a Communications Station that had the text:

Entering 97C-303N-5884-P into the second glyph returned the "accepted" screen, confirming the link between Waking Titan and No Man's Sky. At this point, it should be noted that No Man's Sky had a concurrent ARG involving 16 cassette tapes. The prominence of the number 16, as well as the method of hiding spectrograms in audio, make it highly likely that the No Man's Sky ARG is intertwined with Waking Titan.

At about 5:20 AM UTC an advertisement was played on SBC Paradise FM which references a service called Echo Software, and a website.

At first, http://echo-64.com had the text, BEGIN SECOND SEQUENCE ... Initialization may take up to 24 hours.. At 17:12 UTC on 10th June, the site was updated into a fully-fledged corporate website. From reading the site, we learned that Echo is a company that allows its customers to synthesize virtual versions of deceased relatives. The purpose of this process is ostensibly to help people recover emotionally from the loss of a loved one. The process begins with sending Echo a 5-minute audio snippet from the person in question.

If you speak during the silent section, the final beep will not occur until you stop talking, or until 5 minutes has elapsed.

Clicking the string of numbers at the bottom of the Echo page, 84.190.188, redirects to Franka Potente - Believe, the third song found in this ARG.

Located on the homepage of the site is a row of 5 geometric shapes. Clicking on all of them yields the phrase:

Clicking again on the shapes, this time in the order of decreasing angle (circle, triangle, square, pentagon, hexagon) yields the riddle

The solution to the riddle is prism, which is the password for the second triangle on the main Waking Titan website.

Searching for anything on the Echo website reveals a set of 5 numbers:

There is also a much larger block of hex underneath. Decoding this hex yields the raw data for a .gif file. Opening this file, you can just barely make out a string of characters: