Difference between revisions of "Waking Titan/Phase 6"

On July 18th, the Waking Titan Stream began counting down to the Extraction Event, which was set to begin on July 20th, at 21:00 UTC.

On July 19th, at 02:06 UTC Emily sent a message over 5 different channels that read:

Prior to the extraction event starting, The stream showed a Situation Report on Season 2 of Project Waking Titan: 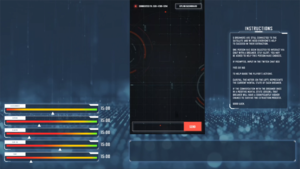 The user interface for the Stabilisation process.

The stream showed meters for each dreamers emotional stability, and a timer to show how long each agent had to stabilise their respective dreamers.

The instructions on the stream stated:

The first agent spoke with Alexander. They managed to stabilise him in 12 minutes 23 seconds. A full transcript was made available by the agent.

Players were then asked whether or not to use the remaining time to extend the time limit on the next dreamer using the !yes or !no commands.

(It was at this point that the bot handling the tally was discovered to have been broken, so henceforth, all remaining time was immediately transferred to the next dreamer)

The second agent spoke with Simon. They managed to stabilise him in 9 minutes 12 seconds.

The third agent spoke with Claire. They managed to stabilise her in 14 minutes 10 seconds.

The fourth agent spoke with Eun Ha. They managed to stabilise her in 16 minutes 17 seconds.

The fifth agent spoke with Toby. They managed to stabilise him in 11 minutes 4 seconds. 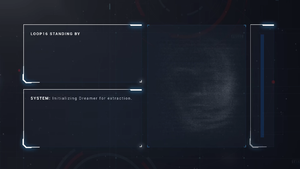 The user interface for the Extraction process.

After the stabilisation process had concluded, the screen changed to say:

A couple of minutes after, loop16 wrote:

When the extractions began, The system said:

Alexander, Simon, Claire, and Eun Ha were all extracted without problems, Toby however, had to have his extraction temporarily halted. Loop16 messaged again:

Immediately after, Loop16 began shutting down.

After a few seconds, Toby was safely extracted.

The end of Waking Titan Season 2

After the conclusion of the extraction process, the stream then showed a message from Sean Murray.

After this, Element 7 was unlocked.