This page describes in detail the events of Chapter 5 in the Entropy ARG.

On July 30, 13:00 UTC, Primorda tweeted an image with columns of digital characters with mostly / characters, alphanumerics, and a few scattered Myanic characters. Over the course of 4 hours, 4 images were tweeted in response to players sending Sigils of their own design. The Myanic characters provided one-word answers to the statements made in each sigil, the calls and responses are as follows:

After all 4 images were received players discovered that the character strings were MKM encoded Steam codes. When each was entered, players were allowed to download a non-public beta version of a PC application named Cryptolancer. 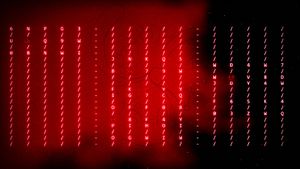 The Cyptolancer app initially seemed to have many things in common with the Eyes of Entropy app. Discord communicated with an MKM Operative (CLU16) working for the MKM (now known as "Makama" which means matter in Korvonic) corporation in another verse. Prior to MKM responding to players, the app presented small narratives regarding each major character known at the time:

Players then asked many questions in Discord, to which MKM answered selectively.

Through this Q&A Players gained insight on MKM, the Silatanum, Entropy themselves and may have secured a way to reconstruct and revive Kyren if those who are in charge at MKM approve. It was also show that The Host (Curtis) is able to utilize this communication system, alluding to the possibility that the other entities are capable of such as well.

On August 29th Entropy tweeted 2 images. The first image depicted various constellation symbols intermixed with Korvonic phrases and a 10x10 grid of Korvonic characters. The second image showed a rocky landscape with more constellations and Korvonic. Players quickly translated the Korvonic phrases in the second image, but the grid proved difficult because the translated characters appeared to be gibberish.

The next day Entropy began communicating via the Cyptolancers app. 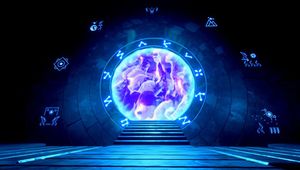 Players suspected that the closed portal located in the Sanctum within Our Nation's Miner was preparing to open. Soon after, the portal did indeed open.

Entering the portal transported the player to a first-person environment previously depicted in Entropy's tweets. Exploring the environment revealed 8 monoliths with more constellations and the 10x10 grid.

Players discovered that the monolith symbols were all in pairs, and each symbol was a digit 1-10. Using each pair as an XY coordinate on the grid, English phrases were discovered. As each deciphered phrase was entered into Cryptolancers, more archives were revealed.

On Sept. 4th, Entropy tweeted another image containing a single Korvonic phrase that translated to MANIFEST. Soon after, Entropy sent an email to a player with a second image. It translated to KANUA.

Entering each decoded phrase into the Cyptolancers revealed 2 additional Archives. Soon after the 13th archive was discovcered.

The next day the 4th image was delivered to a player via email. It was translated to REPEAT which revealed archive 16.

Players assembled the 4 images into a large composite.

on September 27, 2018 Curtis announced the availability of a new verse in Cryptolancers. As players explored the new environment 4 murals were found inside, each with a few Korvonic characters interspersed with what appeared to be many blank spaces, making it difficult to translate. Entropy later posted 4 clues via the Cryptolancers app that helped players literally fill in the blanks. 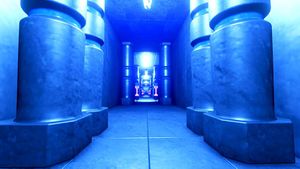 On September 28, 2018, a new YouTube video was posted to the Entropy channel. The video depicted an entity that players assumed was Silatanum, who was introduced in Chapter 4. Silatanum delivered a 4-minute vocal statement in a harmonic monotone voice that was clearly not an Earthly language. Within less than an hour, Curtis posted to Discord a transcription of the statement that he said was provided by Entropy.

Players then referenced a translation document they had been maintaining as emails and other interactions with Entropy occurred over the course of the ARG. They realized the speech in the video was the spoken version of Korvonic. The purpose of maintaining the document was not previously understood.

A number of words were recognized, and an effort to translate commenced. Players started working together using a Doc in an effort to complete a full translation.

Over the course of 10 days, players continued to struggle with translating. MKM came back online in the final 2 days, interactively assisting with words that were singular in the transcript. A final translation was eventually revealed.

Curtis later confirmed that this was a partial endcap to the Entropy ARG.