Difference between revisions of "Eye Sigil ARG/Kingdom of Loathing" 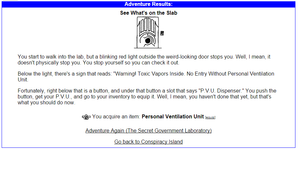 Kingdom of Loathing is a browser-based, multiplayer role-playing game designed and operated by Asymmetric Publications, LLC. It exists since 02.10.2003 and has a long history of weird secret in-game and partially out-of-game puzzles. 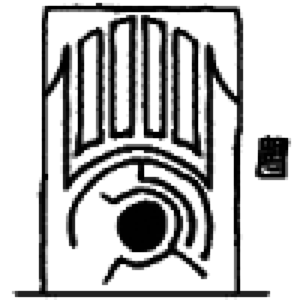 The monsters in the zone have a limitation on the amount of item drops for a player per day (10), so the the information about them was intended to be gathered by the community over time. Each monster has a common potion/food drop, a rare equipment drop and a special drop that has to be activated by using A Mysterious Control Panel on the Conspiracy Island. Additionally there is one extra special drop that is activated there and drops from all the monsters.

As it's possible to notice, these drops (excluding the extra ones added later) have different first letter. In fact, their first letters are from the set from A to M. If ordered alphabetically and the last letters extracted from the list, you get nlry9htdotgif. This refers to the puzzle piece nlry9ht.gif on the image server.

Over the time the sigil was unsolved, people have wrote in with questions to the podcast that KoL devs make about the game. The developers acknowledged the existance of the overall ARG and gave very minor hints:

A day before the puzzle was solved Discord user TheSparrowHunter contacted Jick by email, clarifying things, including asking if the images are involved in the puzzle and recieved an answer "no".