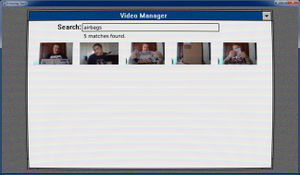 Unboxing Story is a Unity game by Twinbeard (or rather Twinbread?) available for free download from http://twinbread.com/hotdog.html. The game is made in the likeness of Her Story; in particular, a player can type in words and watch the 5 first videos that match the search.

Unboxing Story was discovered on 15 Dec 2016. According to the http header Last-Modified, the file was uploaded to the server on 13 Dec 2016.

The videos are the unboxing videos made by Philip T. Anderson, where he films himself unboxing various things for Phil's Cool Stuff Corner (the name changes for some videos). There's also some mystery content hidden throughout the game.

Phil Anderson does 15 unboxings in total over the span of 61 videos. There's also a secret 62nd video that leads to some puzzles. You can search for the videos yourself by using any of the words listed below. The unboxings are listed in the orders they are in the game files. 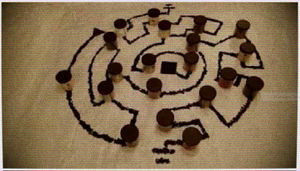 You can search for the secret video using any of these words: mystery hidden secret mysterious secrecy enigma. Internally it's called "cats". It features the compelted Eye Sigil ARG map made from some sort of dark small pieces of something (maybe cat food) on the floor of an apartment with a cat jumping over them and knocking off one of the cans that represent the circle nodes.

The video audio is a slowed down (about 4x-5x) version of two people saying "password" in silly voices.

Once you've seen that video you can search for the password of the Eye Sigil ARG, which was elmourouj, which loads up the Sigil Maze. 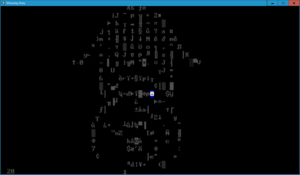 Inside the maze, the player controls an ASCII character that moves up/down/left/right through screens, each of them being an Eye Sigil ARG sigil with some certain foreground and background colours. As you leave the screen through any edge of it, the number in the corner counts down. Initially that timer starts at 20 (that's a gray on black sigil), so you have 20 moves.

If you move through the maze "incorrectly", you'll end up back on the screen you started from. But from "correct" moves you'll unlock another, 63rd secret video that is encrypted in the game file, with the preview being a frog. You'll get that video for "elmourouj" from there on, unable to get "back" into the Sigil Maze.

However, unfortunately, it looks like the game can determine the path as false positively correct and the video won't decrypt correctly and won't play. An example of such a path that we have right now is down x11, right x1, down x1, left x2 ,up x2, left x1, right x1, down x1

Behind the scenes the secret video is encrypted with AES, the salt is hardcoded the source code (0x60c3d1cf1629c4e418ed99b7ee1ec176), but the key is derived according to RFC2898 from a string that is a concatenation of moves through the maze (string constants "b", "u", "tt" and "s" are used for directions)

The correct way through the maze is to take the directions from the Sigil ARG map itself (that has 20 nodes on it for the 20 moves): going through the map, if a node is on a line — you go up in the maze, if it's on a corner — go the direction you're about to turn in. Full sequence:

This unlocks the secret video, which we reuploaded for easiness to YouTube:

We've sent an address to the contact as required. See here for what we got in return.

Clues from the video

In addition to the lore and the message itself, the uncountable frogs and fraction puns, the video has some weird things: