This is the stable version, checked on 8 December 2021. Template/file changes await review.
Jump to: navigation, search

On tonight’s episode of Mysteries Unknown we explore the dark history around a plateau in Peru with some perplexing properties.

Before the PUBG Lore website opened, 9 popular PUBG influencers were sent packages containing several items, including one of nine mysterious fragments of a stone tablet, supposedly originating from Paramo, appropriately named the "Paramo stone". The other items included were a letter from one "Dr. Burton A. Northrop", the key to decipher the stone's text, and an image of the complete stone showing the layout of the fragments. Some of the fragments ended up stuck in customs, and the complete stone was never assembled. Parts of what was deciphered and the key to the mysterious text can be seen in this YouTube video.

At first, the website showed a collection of several photos and objects, with a "Get Notified" box allowing an email address to be entered, a button to allow browser notifications, and a share button for Facebook and Twitter. This form of the website is what was later called the Staging Area. While the staging area could no longer be accessed on the main website after the full site was released on October 15th, a copy of it was later found on a separate domain.

After a user entered an email address, 6 objects in the background image would start glitching and become clickable. On clicking one, a very short audio-less video of a few seconds would play, and a prompt would appear to enter a passcode.

Each of the six objects corresponded to a specific map in the PUBG game.

Entering the proper map name would display a specific quote from a PUBG lore video, and the image corresponding to that map would cease to be interactable.

The passcodes and what they were attached to are as follows:

Once all 6 passcodes were entered, a new message appeared in the background:

You have proven yourself. Magna Venari.

On October 15th, it was noticed that the website had been updated and the staging area had disappeared. The new version of the website contained several lore articles, such as characters' lore, journals, and other stories. One article of significant note was "The Journal of Dr. Burton Northrop", consisting of a transcript of the eponymous journal – this journal would later become of significant relevance to the ARG.

Some of the locked lore entries, seen on the main page of the website, each displayed a date upon clicking on them, speculated to be their unlocking date.

The following line was discovered in the website's source code, included with the other meta property tags:

The text was identified as a ROT13 Caesar cypher, decoding to the following:
How original, a Caesar cypher... Get ready friends, this is only the beginning.

On October 16th, the website was placed in an apparent maintenance mode, displaying the message:

No way was found to access the articles from the previous iteration of the website while it was in this "Updating" phase.

The ROT13 text from the previous iteration of the site remained in the source. A new line also appeared an hour after this was found:

And again changed a few hours later to:

This new status number consisted of the first 11 digits of pi, although no significance to this was found in relation to the website.

On October 18th, the website's background image changed. This new image showed four short braille texts, three of which were shown as 'locked'.

At the same time as this update, the 'Status' comment in the source code was also updated:

The first braille text was translated to a difficulty level and a link:

The second, third, and fourth braille texts (the 'locked' ones) translated to only the difficulty levels:

The first five letters in the 'Beginner' link used the same ROT13 cipher that had been used previously (translating to BIT.LY). The # indicated that the following characters were numbers and had to be removed, as was also indicated by the braille character being yellow. Thus, the decoded link was bit.ly/5468753, which led to an Imgur post consisting of an image of a journal entry and a caption. The caption below the image was as follows:

Combined, the journal entry and the caption pointed towards the process of radiocarbon dating, a method used to determine the age of an object containing organic material. The credited inventor of this method was chemist Willard Frank Libby, who died in 1980.

Condensing this name to "WillardFLibby" would fit with the formatting used for the email address in the caption, and indeed, sending an email to [email protected] would result in an automated reply:

The quoted phone numbers, when called, all brought the caller to a menu with several options, spoken by a woman with a sourthern USA accent. This menu is transcribed as follows:

Pressing 1 to reach journal entry number 1 gave the following entry from Dr. Northrop's journal, narrated by the same voice as the menu:

Pressing * or # would just loop back the phone menu.

Around an hour and a half after the first braille text was made available, the second was unlocked with an updated background image.

The 'Status' comment in the source code was also updated alongside this:

While the yellow character was different this time, it could still be removed, producing the link bit.ly/6239245. This led to a Pastebin post, transcribed as follows:

Searching up the first part of the riddle revealed it was a reference to Euler's number, represented in decimal as 2.71828.... The second part of the riddle, referring to "ten fingers only", was taken to refer to the first 10 digits of the number. Combined with the partial 'Answer' link, this produced the link bit.ly/entry_2718281828.

This second bit.ly link led to Imgur for another journal entry, and at the same time unlocked journal entry number 2 in the phone menu:

About 30 minutes after the second braille was solved, the 'Status' comment in the source code was once again updated:

A screenshot of the site at the end of October 18th

Almost 2 hours after the second braille was solved, the third was unlocked with an updated background image.

The status in source code changed to update to the following:

Notably, the yellow character in the second braille was corrected to be a # instead of a V in the updated background.

The third braille code translated to:

This third braille link followed the same principal has the other two, translating to bit.ly/1259437, which in turn led to a Pastebin post with the following text:

The solution to this riddle involved the used of a binary tree with logarithmic roots, leading to the numbers 1, 2, 4, 8, 16, 32, and 64. The solution was thus bit.ly/entry_1248163264, which led to Imgur for a new journal entry and unlocked journal entry number 3 in the phone menu:

The source code changed several time during the day, though the fourth braille link remained locked. The following is the progression of the changes to the 'Status' message:

The final thing that was noticed was a slight change to the website, with the maintenance message returning to its initial appearance.

The status message continued to be updated:

On October 20th, the background image was updated, revealing the fourth braille link.

The status message in the source code was also changed, to:

When calling the phone number, the resulting message had also changed. It now stated the following before the usual menu:

The fourth braille code was translated as:

The first line could have been either GDBeginner or 74Beginner - this was subject to debate as both GD and 74 use the same braille characters.

This fourth braille link, bit.ly/9534561, led to another Pastebin post with the following text:

The solution was Benford's law and the wiki page specifically. Using the percentages associated with the 4 numbers found in the example led to the solution of bit.ly/entry_1763014667. This redirected to an Imgur post of another journal entry from Northrop's journal. No new phone entry was unlocked and no 7 digit code was found.

This is a list of the current entries from the journal of Dr. Burton Northrop discovered as part of this ARG's second phase. They have been placed in chronological order and include their source.

Entry from pressing 1 when calling the phone number. Refer to the first unlock for details on the number. 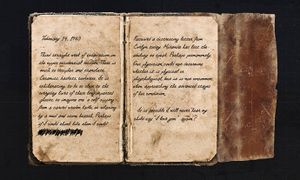 Milestone 2
Entry from milestone 2 after solving the second braille puzzle. Refer to the second unlock for details on the puzzle.

Entry from pressing 3 when calling. Refer to the first unlock for details on the phone number. 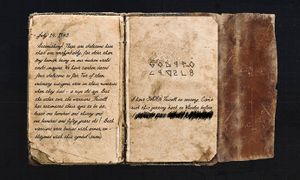 Milestone 1
Entry from milestone 1 after solving the first braille puzzle. Refer to the first unlock for details on the puzzle.

Entry from pressing 2 when calling. Refer to the first unlock for details on the phone number. 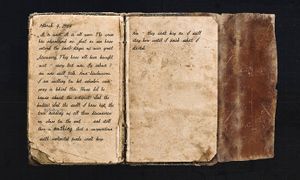 Milestone 3
Entry from milestone 3 after solving the third braille puzzle. Refer to the third unlock for details on the puzzle. 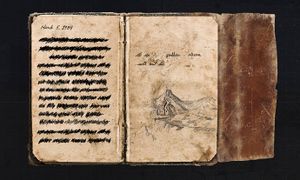 Milestone 4
Entry from milestone 4 after solving the fourth braille puzzle. Refer to the fourth unlock for details on the puzzle.

The version of this entry as transcribed on the website reads slightly differently: