This is the stable version, checked on 28 March 2018. Template/file changes await review.
Jump to: navigation, search 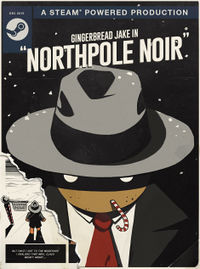 North Pole Noir is a comic that was released throughout the Steam Winter Sale 2015. A new page was released daily during the sale, until 11 pages were available. See the page summaries below, or visit the original comic pages on the Steam site.

Cover page. No plot to speak of. 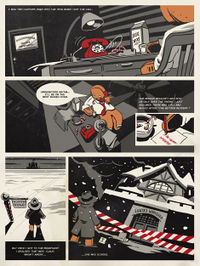 Private investigator, Gingerbread Jake, is sitting in his office drinking eggnog when the phone rings. An unknown woman on the phone that Jake appears to know tells him briefly that something had happened and he is required. He assumes her brevity is due to dealings with a previous event, 'the Blitzen Incident', and her associated bad feelings. He writes Murder and North Pole on a piece of paper on his desk and tells her he'll get the next sleigh over. In the next panel, Jake is at the North Pole. He sees Santa's Workshop closed off with 'police tape' and some evidence markers on the floor. He realises that Mrs. Claus (the woman on the phone) was not angry, but scared. 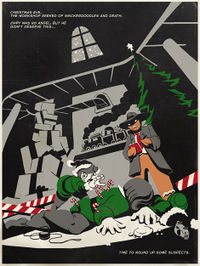 Jake stands over the body of a deceased elf inside the workshop as he takes notes in his notepad. We learn that the victim is named Zippy. Jake knows he is 'no angel' but ruminates that he doesn't deserve to be murdered. The body appears to have been stabbed with candy canes. Another, distraught elf leaps forward to his companion in grief. Jake decides it is time to start investigating murder suspects. 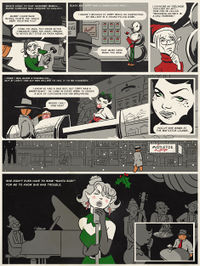 Jake begins his questioning of the other elves. He asks an elf named Monte about his presumed gambling addiction. Monte responds that since Cinammon took the kids, he had sworn to never set his eyes on "Vixen" again.

Jake visits Blase in his art gallery. Blase tells Jake he has not spoken to Zippy since he trashed his gallery while inebriated on pruno. Upon Jake suggesting that this must have made him mad, Blase responds that he expresses himself through his art and references his latest piece, "Snowman Artiste is a Red Herring".

With no good leads, Jake visits Sparkles at her bakery. She informs him that he was sweet to his girlfriend and bought her cupcakes every week. Jake asks where he can find this girlfriend and Cupcake directs him to, Holly, who sings at the Mistletoe Lounge.

Jake walks into the Mistletoe Lounge and seats himself. He watches Holly performing a song and can instinctively tell she is 'trouble'.

Jake is seated with a drink in front of a crime board filled with the clues. He appears to speak to himself, stating that he 'knew Holly was hiding something' and mentions the number of enemies that Zippy had. Jake states that in order to find the truth, he would need to make a deal with the devil, Twinkle.

On the crime board, a number of clues of the murder feature prominently, including: a picture of Holly, a copy of the Blitzen Incident case file, a photograph of the Black Ice Boys, a photograph of Twinkle, the Mistletoe Lounge, a calendar with the date, a Chinese New Year envelope, and a red herring fish. 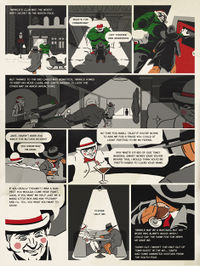 Template:Clear Plot Although the club is not a well-kept secret, it exists due to a deal known as the Red Christmas Armistice. In it, Twinkle agreed to keep his nose clean in return for Santa ignoring minor infractions. Jake heads to Twinkle's club, and gives the bouncer the password, 'Hot toddies and maseratis' to gain entrance. Twinkle mentions that he has not spoken to Jake since the Blitzen Incident. Jake speaks to Twinkle of the crime and requests his help. In return for Jake asking using 'please', Twinkle agrees to give Jake his help. 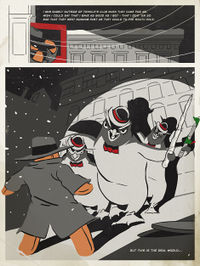 Outside Twinkle's club, Jake is approached by the Black Ice Boys brandishing weapons. 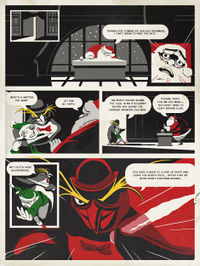 Santa is searching his desk for the 'nice' list, which seems to be missing, while waiting for Rhombus. Taffy bursts in holding an elf hostage. With a shove, he releases the elf and demands that Santa close his workshop. Taffy gives Santa a deadline of three days to close up shop before he begins 'stacking bodies'. 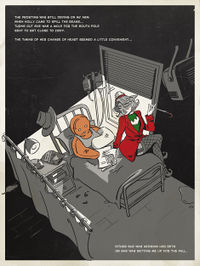 Jake rests in a hospital bed with a copy of a file in his hand and a magazine called New Detective on the nightstand. Holly sits on the side of the bed, a candy cane dangling loosely in her hand. She discloses to Jake that she is a mole for the South Pole sent to get close to Zippy. Jake is unsure if her confession is sincere or if she is setting him up for the fall.

In a sleigh, Mrs. Claus instructs her coachman to take her to the black site. The reindeer pulling the sleigh appears to have a bright red nose, indicating that it is possibly Rudolph. There is a string of Christmas lights strung between two evergreen trees. The reindeer trips on the lights, overturning the sleigh. A penguin greets Mrs. Claus sinisterly.

On New Years' Eve, Jake has his left arm in a cast, signed with the words 'Get better' and a kiss. Under the influence of painkillers, he hatches a plan to get Mrs. Claus back. He calls on Twinkle for gear, Santa for muscle, and Holly for information.

Santa, Jake and Holly take the fight to the Black Ice Boys, but it appears that Holly was carried off by Taffy. 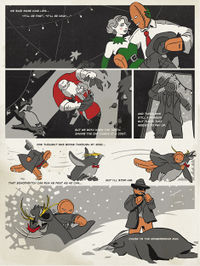 Ending page. No plot to speak of.

Comic pages in other languages