Waking Titan (also known as Project WT) is an ARG (alternate reality game) that involves a multitude of websites, phone numbers, and radio stations scattered across the world. The ARG is produced by veteran puppet masters Alice & Smith, and features NPCs, actors, and live events.

Of the sci-fi genre, its story—linked to the origin of No Man's Sky—follows a powerful A.I known as Loop16 that is created by The Atlas Foundation to simulate a one-to-one recreation of reality that can accurately predict the future.

The ARG encompassed several "seasons," each leading to a new update for No Man's Sky. Season 1 of Waking Titan led to the Atlas Rises update and Season 2 is leading to No Man's Sky: NEXT. Season 1 was further divided into several distinct "phases", and Season 2 has followed this convention for ease of reading. Each phase is documented on its own wiki page:

Note: This is a summary page. For more in-depth descriptions of each phase, including detailed descriptions of puzzle solutions, check the Phase 1, Phase 2, Phase 3 and Phase 4 pages. 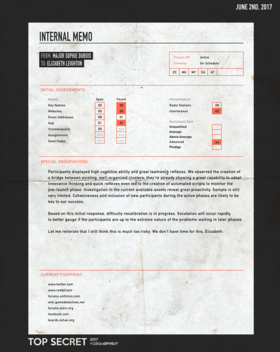 One of the internal memos discovered in Waking Titan

Throughout the ARG, in-game characters have communicated with each other via "internal memos". Over time, these memos were discovered by ARG players, in the form of PDF files. These memos provided lore content and puzzle content, and are highly recommended reading for new players!

Navigating through the following subpages is recommended for newcomers wanting to get a grasp of Waking Titan's rapidly expanding story.

Partial video addresses for Youtube can be found scattered across Waking Titan PDFs, website files, and surveys; which all lead to music. The exact reasoning for this has gone unexplained. However, there are apparent thematic relevancies in each song that appear to reflect on the state of the story. All songs linked to in Waking Titan so far can be found compiled here: WT Season 1; WT Season 2

On 2017-05-27, Twitter user @argn tweeted a link to 'project-wt.com'. The link led to a website which contained a map showing sixty locations, four of which were "active" at the time. The locations, when clicked on, revealed the location's name and status. The active locations also revealed a link to a livestream of a local radio station, originating from the corresponding location. The project-wt website displayed a date, June 8th, and stated that the first clue was being "initialized".

On 2017-06-01, moderators of No Man's Sky subreddits /r/NoMansSkyTheGame, /r/NMSPortals, and /r/NMSGalacticHub started to receive cassette tapes in the mail. Each cassette tape was labelled with a number out of 16. The Waking Titan ARG was initially thought to be a separate ARG from these tapes, but connections between the two made it clear that they were, in fact, one and the same.

The default appearance of the Waking Titan site during Phase 1, with no sigils or glyphs solved

During Phase 1, the http://wakingtitan.com hosted 6 triangles in the middle of the page. These triangles were referred to as "Sigils", while the white icons along the bottom of the page were referred to as "Glyphs". Each sigil and glyph, when clicked, lead to a password entry prompt - the correct passwords for all 6 sigils and the first 5 glyphs were discovered via puzzle-solving during Phase 1 of Waking Titan.

The sigil and glyph puzzles were solved collaboratively - while it may have be possible to solve some of these puzzles individually, most of them required a collaborative effort. For instance, some puzzles required players to meet agents from the Atlas Corporation in person, and to relay information obtained from these meetings back to the community. A list of all sigil and glyph solutions for Phase 1 can be found below: 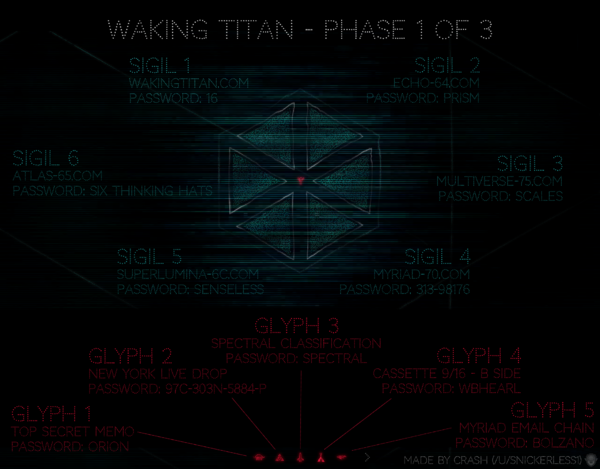 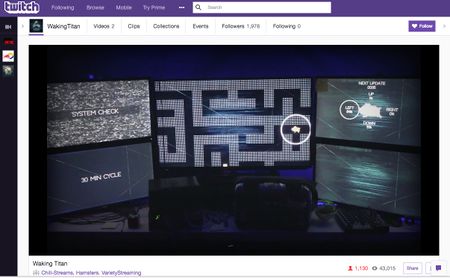 Additionally, http://project-wt.com hosted a "Calibration" utility during Phase 2. To successfully perform these calibrations, players had to upload images of various objects and buildings to the site. For instance, the first calibration required images of "public resonant percussion instruments".

Finally, towards the end of Phase 2, the Waking Titan Twitch stream went live, displaying a five-monitor setup. Throughout the duration of the stream, players had to work together to solve puzzles that were displayed on these monitors. Some of these puzzles were interactive; for example, one puzzle that was repeated several times involved the Twitch chat guiding a virtual hamster through a maze.

Additionally, players solved another 3 glyphs throughout Phase 2. The solutions to these glyphs are shown below: 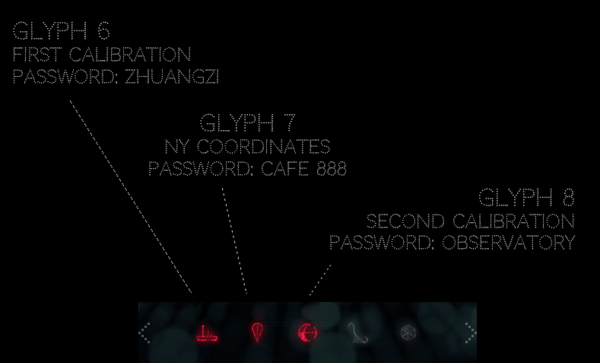 Phase 3 was the briefest phase of Waking Titan. It consisted of the conclusion of the Twitch stream that began at the end of Phase 2. Players solved more interactive puzzles on the Twitch stream, before the rogue AI Loop16 asked them a final question: SHOULD I EXIST? The overwhelming response from the community was "yes".

After receiving this response, Loop16 and Emily of the ETARC forums were revealed as being one and the same. Loop16 generated a heartfelt "Thank You" video to round out the stream, before finally taking the 72-hour stream offline.

Shortly after this, players received emails with the subject line Waking Titan has Ended. The contents of the message were as follows:

Connection to No Man's Sky

At the beginning of the ARG, it was not clear whether Waking Titan was officially connected to No Man's Sky. At first, there were only hints and nudges. At one point, 180 free copies of No Man's Sky were distributed to ARG players. Here's the text of a PDF that was revealed at the end of Phase 1 of Waking Titan:

This text explicitly stated that the Waking Titan ARG was leading towards the upcoming 1.3 update for No Man's Sky.

Some console commands on the Waking Titan website during Phase 2 refer directly to No Man's Sky lore - for instance, WHOIS ATLAS, WHOIS VY'KEEN, and WHOIS KORVAX are all valid commands. Additionally, some terminal commands referred to a mysterious fourth race, so the prevailing assumption was that the upcoming 1.3 update would bring a fourth race to No Man's Sky.

At the conclusion of the ARG, an email was sent out to members of the CSD with a memo from Sean Murray, confirming that the ARG was the lead up to the 1.3 update, which was released after a few days.

[EN] Forbes - 'No Man's Sky' Is Patching In A Story This Week, A Year After Launch

19th January 2018
[EN] Eurogamer - No Man's Sky's Waking Titan ARG is back, and fans are trying to figure it all out again

[RU] DTF - A Collection of No Man's Sky and Waking Titan Articles.