From Game Detectives Wiki
< THE VAULT
Jump to: navigation, search

Note: This page contains the complete outline of Chapter Three of The Vault 2 ARG. If you just want a brief summary of completed chapters and to see the current Ongoing Investigations, check out the main The Vault page.

Chapter Three began on Feb. 28, 2019 with a transmission from Doc in the Discord Server. 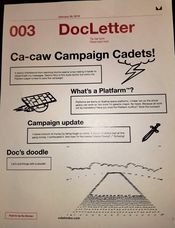 On Feb. 28, 2019, Doc broadcast the following transmission in the Discord Server:

Heroes determined that the question how many roads must a Doc walk down? was a reference to the Ultimate Question from The Hitchhiker's Guide to the Galaxy. The Ultimate Answer being 42, Heroes found DocLetter 003 at the FedEx location in New Orleans, LA (Location #42 on Doc's Campaign Offices). Doc's doodle at the bottom of the letter was a connect-the-dots version of a yellow brick road, which could be another reference to https://www.stashinvest.com/the_end.

Also, in reference to The race is on!, the page https://ilovebeez.com/caucusrace.html had updated.

The updates probably showed the Heroes' progression in their race against Doc. 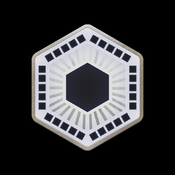 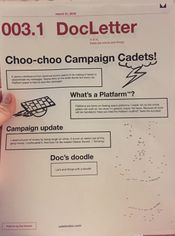 On Apr. 1, 2019, Doc broadcast the following transmission in the Discord Server:

Heroes determined that the section The buried sneaky criminal "hunters" trapped deep down will never find my hidden message! Supporters let's get on the same page! referred to page 65 of Ready Player One where they had originally found the hint about the Notched Letters "buried" within the book. Heroes then found DocLetter 003.1 at the FedEx location in Washington, D.C. (Location #65 on Doc's Campaign Offices). Doc's doodle at the bottom of the letter was a connect-the-dots version of the Ghost Lantern from The Legend of Zelda: Twilight Princess HD.

The Heroes also believed either Cedric or Dampé was leaving hints in the transmissions and the letters as this latest transmission noted it had been dictated.

After the disappearance of 743_Devout_Chronicler, the Mission_Controller AU on the Fellow Ship began malfunctioning. Renamed M4HS3RN_CERNTRERLR, its responses to basic commands were now filled with gibberish. For example, a Hero flying to the orbit around Titan using >fly 40443_70-4093 received the response It'!s g!o !!ti!me! @Hero. Tra!je!!ct!or!y to 40443_70-4093 lo!cke!d!. La4444ndit66ng e###nga###ged. Welllwelllwelllelelcome to !Titan, @Hero.. No pattern was found in the gibberish.

M4HS3RN_CERNTRERLR also began responding/reacting with emoji to certain words and commands. These were known words and responses that worked in #1057_and_found and #titan:

Heroes were also soon introduced to the AI 924_GR3G4R10US_F1RRR3WORK, who had taken over the account of 743_Devout_Chronicler, and another character now known as Mellifera (Zerg Egg).

On Mar. 9, 2019, the Heroes discovered that the border color on https://www.stashinvest.com/the_vauit was different from that on https://www.stashinvest.com/the_vault. Using the border color from /the_vauit in #1057_and_found as the command >7c73eb gave Heroes the role of HEXCELLENT and they gained access to the channel #mstr-room. (They could also use the >7c73eb command to exit #mstr-room.) Upon entering, Heroes received the following message from M4HS3RN_CERNTRERLR:

The description for the new channel was:

This description very closely resembled the description from room 27a (The Chamber of Hopelessness) in the Tomb of Horrors module:

Heroes who entered this room were given the STARVING role. Heroes were able to remove the role with the .use command and a Platfarm™ Berry Muffin. The role returned if Heroes remained too long in the #mstr-room with the assumption that having the role for too long would result in the Heroes' death.

The Heroes had in their possession a Binary Hookshot found during the Tomb of Hope D&D-like campaign (believed to be the same hookshot used during Vault 1.5 to reach Dampé's ship). The Binary-Hookshot role was identical to the border color of /the_vauit. Translating DIE to binary, the Heroes used the command >010001000100100101000101 and were able to reach the suspended cage. The command gave the Heroes the + role and the following message: You hookshot up to the glowing ball of electricity floating above you. There is a terminal with a keyboard.

The >look command was then updated to read:

And the description of the channel also changed:

Doc's transmission from Apr. 1, 2019 contained the lines [...]as we near the beginning of the end of the election! No room for error now campaign cadets.... The Heroes determined that this clue referred to the phrase LANTERN_VOID_ERROR on https://ilovebeez.com/743_8361N-1N6.html. Using the command >LANTERN_VOID in #mstr-room gave the Heroes the ‡ (diesis) role and the following message:

On Apr. 10, 2019, the Heroes noticed that each line of the poem from the Tomb of Hope was indented a number of spaces over.

By putting the poem in a grid pattern and counting the number of spaces before the first letter, the Heroes discovered the command >04084804441204401501440 which gave the following response:

Once 924_Gregarious_Firework was fully charged on Apr. 12, 2019, they and the Mission_Controller AU began updating and purging the corruption on the Fellow Ship. Heroes were now able to use the command >1057 which granted them the following roles (if they didn't already have them):

The description for #mstr-room changed to Escape. and the >look command was updated to read:

On May 5, 2019, the Heroes figured out how they needed to use the hex code in the socket diagram. The first 4 instances of bits with the word "die" in them were:

924_Gregarious_Firework then broadcast this transmission:

Escaping the Tomb of Hope

On May 6, 2019, after 924_Gregarious_Firework had charged, the AI and the Heroes were able to escape #mstr-room using the >a4134133413d command. The channel #1057_and_found then changed to #hope-engine-room to mark the Heroes progress in their escape. Each new room had a terminal which needed to be hacked to gain access to the next room and the hack command for each terminal related to something previously encountered in the ARG. Using the >hack command returned the response:

Each terminal that was successfully hacked added 2,000,000 votes for Doc.

In #hope-engine-room, when the Heroes used the command >terminal, [MISSION_CONTROLLER] responded with:

This clue was a reference to the Notched Letters hidden throughout Doc's Ready Player One book. The Heroes were able to hack the terminal with the command >hackELBIEOEZV, which returned the response:

The Heroes noticed that after hacking the terminal, the page https://ilovebeez.com/caucusrace.html had updated to:

The channel changed to #hope-hallway and the new >terminal clue was:

This clue was a reference to the Friday the 14th Meeting, specifically the Hidden Meetup Coordinates discovered in LOSTMAZE1. The Heroes were able to hack the terminal with the command >hack4075541873990861, which returned the response:

Again, the page https://ilovebeez.com/caucusrace.html was updated to now read:

The Heroes then made their way to #hope-bridge and the new >terminal clue was:

This clue was a reference to Terminal 100. When the Heroes originally hacked Terminal 100, the received the message Two hacks out of six powered. Now !hack on Heroes!. So there were still 4 hacks not powered. In order to escape the current room, the Heroes needed to find all 4 of those hacks for this terminal. This was determined after the first hack was found and the response was:

The 4 hacks were solved using both the previous hack from #hope-hallway and the multiplication methods for the previous 2 hacks from Terminal 100. The 4 new hacks were:

Moving on to #hope-hall-of-maps, the Heroes were given the >terminal clue:

which was later changed to:

FURY later found a way to intercept more transmissions between Doc and his Replicatz. One such transmission had a few interesting hints for the next hack.

These clues were a reference to 2 things:

The Heroes determined that the new command was >hackboletusregnum, which is Latin for Mushroom Kingdom. The terminal response was:

The channel changed to #hope-teleporter and the new >terminal clue was:

This clue was a reference to the Roman Maze, specifically the 13th grouping of decimal number/Roman numeral and binary number from the path. The Heroes were able to hack the terminal with the command >hack1210110, which returned the response:

The Heroes then made their way to #hope-ready-room and the new >terminal clue was:

Since the Heroes were currently on Titan and there are 382 Earth hours in a day there, the Heroes calculated that 17.15183246073298 Titan days before FURY's post equated to roughly 273 Earth days, or Nov. 16, 2018. This was the day the Heroes hacked Doc's email with his password: DOCSPASSWORD, which resulted in Doc's website being hacked by Robert Baron.

The page https://ilovebeez.com/caucusrace.html was updated to read:

The Heroes then made their way to #hope-boarding-ramp. Using the >look command, the description of the room was:

The clue from the accesible >terminal read:

The heroes determined that the Tactical System they had used for hacking the Io Shield was Schmargdorf technology. There were 5 relevant links used for Hacking the Shields with Terminals

Reading the digits from the encrypted terminal as the link number, the position after the first underscore, and the length, gave the Heroes iois1s7didwerewinfd701031. After figuring out there was a typo in the clue, the Heroes were able to use the command >iois1s7didwerewind701031, which translates to Io is 1st. Did we rewind to 10/31, referring to the day Doc announced his campaign for Galactic Mayor. This command returned the response:

The description of the room then updated with the >look command to read:

The >coordinatehelp command provided the clue:

The clue of rewinding to 10/31 referred to the end of Vault 1.5 and Dampé’s ship,which played the music 1f_y0u_kn3w_t1m3.mp3. The Heroes determined the new command was >1f_y0u_kn3w_t1m3, which gave Heroes a dynamite emoji role (🧨) and returned:

The clue using >passwordhelp was:

This was a reference to the earlier encrypted clue where 4.13.6 stood for rewinf, so the new password was >ffffff, which gave Heroes a new moon emoji role (🌑) and returned:

The clue using >launchhelp was:

This was a reference to the hidden letters found on https://www.stashinvest.com/BOOM. The paths of the letters were hidden in the SVG using the style element <style type="text/css">.st0{fill:#FFFFFF;}</style>, making the letters white against a white background.

In Vault 1.5, the Heroes originally reached the BOOM page by first going to https://www.stashinvest.com/the_end, and typing the letters s t o p. As later found in the source code, this led to Dampé’s ship.

At the end of Vault 1.5 after the countdown leading to 22:57:00 on Oct. 31, 2018, Dampé’s ship was blown up and the page now redirected to the BOOM page. Combining the word "stop" used to reach Dampé’s ship with the style element st0, the Heroes concluded the new password was >st0p, which gave the Heroes a new target emoji role (🎯) and returned:

So the Heroes waited to hear from FURY and 924_Gregarious_Firework...