Mystery of the Emblem

Main Page > List of Investigations > Mystery of the Emblem

This page is about the alternate reality game. For other uses, see Mystery of the Emblem (disambiguation).

Mystery of the Emblem (or the Fire Emblem ARG) was an ARG created by whizzer0 involving three characters - Thomas, Josh, and Sara - who used player input to stop a revolution by the enigmatic "Archanea Will Be Ours" whilst a mysterious controller watched over them.

On 2016-03-26, a strange post was made to /r/fireemblem by the user /u/mysteryoftheemblem (later revealed to be Yukimura):

whizzer0 noticed this post and brought it to the attention of other Discord users. whizzer0, nanoi and scoranio soon realised that the numbers represented chapters from the Fire Emblem series of games, and that the first letters of each of these chapters spelt HTTP MISTERIOFTHEEMBLEM ML. The title of the post gave the clue "whyaneye", showing that the Is needed to be changed to Ys.

Thomas was lost in thoughts all alone

This led to the website http://mysteryoftheemblem.ml, which showed a blank page entirely tiled with a brick tile from *Fire Emblem: The Sacred Stones*. It was discovered that the actual background image, intheroom.png was made up of multiple tiles whilst a single tile, imageisnottrulyone.png was placed on top as part of the body of the page.

Whilst the title of the page was initially "thomas was lost in thoughts all alone", this later changed to "image is truly two, if not only as an image". Another hint was later given as text was added to the page; "all books have pictures and words. the pictures are on the cover and the words are inside. here is the cover but the words are separated elsewhere."

From this, Discord user Crauss discovered two more files on the site, with the same names as the image files. imageisnottrulyone.txt contained:

Discord user scoranio solved this by finding the area of tiles in intheroom.png, which led to 81.txt:

The main page of the site then updated, removing the "pictures and words" hint and changing the title to "see you soon".

On 2016-03-27, the main site page updated, replacing the tiles with a blue background and Fire Emblem-style map depicting a single friendly unit and a single enemy unit, with a log also in the room. This image's filename was belowthetower.png. At belowthetower.txt was a list of stats based on those used in Fire Emblem games:

One of the listed items was "/log"; going to http://www.mysteryoftheemblem.ml/log showed a page with messages from "Thomas":

This included a strawpoll where users could vote for whether Thomas should attack the guard or run for it.

The strawpoll ended with "Attack the guard" winning out. This was shown as /log updated again:

The main page also updated, removing the guard and log from the map and showing Thomas' movement.

The main page updated to show Thomas in a field (outsidethetower.png). A new Strawpoll was added to /log as well as the text:

"Go to the town" was the winner of this poll.

A spot of shopping?

The main page updated again, showing Thomas in a town (inthetown.png). /log updated again with another Strawpoll, plus more text:

"Investigate the shop" won the poll.

inthetown.txt was discovered, resembling the list of stats in belowthetower.txt but with lots missing:

The poll was won by "Flee the town".

"Investigate the tower" won the poll this time.

The main page then showed Thomas standing in a hall (thereismore.png). /log updated:

/log updated in response to this, and the page title changed to "graffiti":

A while after that, Discord user soaring_bear entered the channel and solved the puzzle. By using the numbers in graffiti.txt as a book cipher against thereismore.txt (the "THREE LINES" referred to), they found the letters IACH, which when converted into letters became 9138, leading to 9138.txt:

The main page then updated to show Thomas progressing to the next hall (secondhallofthetower.png) and /log updated again with another Strawpoll:

Stats for Thomas and the two guards were found in secondhallofthetower.txt:

"Fight the guards" was the winner of the poll after Discord users decided that Thomas was annoying.

The main page also updated, changing the blue background to black and removing Thomas from the map. secondhallofthetower.txt also updated to show the change in HP:

/log was updated again a little while later with a message from someone mysterious:

At the same time, all known files on the site were removed except for the main page, /log, and secondhallofthetower.png.

Attack of the clones

Death is the end

Later on, http://mysteryoftheemblem.ml was updated once again, now with a red background, the title attack of the clones, and this text:

secondhallofthetower.png was also removed from the site.

Discord user Crauss then solved the text as a Vigenere cipher using the passphrase "attackoftheclones":

Shortly afterwards, the page changed to show this:

Though also a new beginning

Following this, /log was updated, introducing the character Josh and including a brand new Strawpoll:

Having been directed left, Josh happened upon a city. /log updated to read:

A new strawpoll was added to determine Josh's response to the guards (borderforce.png).

Having chosen the peaceful method, the /log was updated yet again, this time with Josh being asked for an ID number as he tries to get access through the gate:

...along with its image counterpart, id.png, which depicted 0123456789abcdefghij with some noise and distortion.

"City Hall" won the poll as evident by the newly updated /log, which is then followed by Josh having to go to an inn because he was tired:

Top of the morning

Some time later, /log updated again, with a new Strawpoll:

Stats for Josh and the guards were found at cityhallexterior.txt:

The poll was eventually won by "Go to the city centre".

Josh continued to the city centre, as shown in /log:

This was shortly followed by:

This revealed that the ARG was set in the fictional Fire Emblem country of Archanea, as well as referencing the song Black Tar from Xenoblade Chronicles X, which would appear again in the ARG's sequel.

Discord user Crauss solved the sixth notice to be a Vigenere cipher with the key "ATOATOVAA", made of the first letters of the first three notices, as implied in the fourth notice:

/log updated in response to this, adding a new Strawpoll:

/log updated again as the attack began, with [another Strawpoll http://strawpoll.me/7207768]:

After "Fight the attackers" won the poll, /log continued to be updated with Josh's progress:

After a while, a new character, Sara, was introduced:

A few hours later, the main page updated to show Josh and Sara in the same field as Thomas was earlier, and /log updated again with a new Strawpoll:

The poll decided that Josh would stay with Sara, and the two continued into the same tower Thomas was in before, as shown in this /log update:

The main page also updated to show Josh and Sara in the first hall of the tower.

Discord user Ayakura noticed that 9138.txt was on the site again, now with slightly different contents:

Revenge of the room of doom

The main page moved Josh and Sara to the next hall, which was the same place that Thomas was killed in. /log updated in response to this with a new Strawpoll:

Discord user Ayakura found secondhallofthetower.txt, now with Josh, Sara and the two guards' stats, which also showed that the guards were the same as the ones Thomas had lost to:

Fight was the chosen option, as the /log was once again updated with our main characters' victory and discovery of something rather intriguing:

The ARG's puppetmaster later mentioned that this part was supposed to have Sara's speech also showing up as Thomas' speech to demonstrate how the bracelets worked, but forgot to include this.

Then, Discord user Ginny found whyareyouhere.txt, implying that Yukimura was the author of the notes:

After a few minutes, the main page's title was updated with the words thereismore, if you remember, seemingly as a reminder about thereismore.txt's content:

@Ginny found the rest of the links from the above phrases:

Right after this build up, /log was updated once again with a new Strawpoll, this time with a big decision:

Jump got the higher vote, which led to a newly updated /log and signified our main characters' resting point:

Let's not go to the city!

The following day, on 2016-03-29, /log was updated again with Josh finally waking up, in addition to the latest Strawpoll:

"Go to the town" won the Strawpoll and /log updated in response to this:

A few minutes later, /log updated with Josh and Sara's progress and a new Strawpoll:

After "Investigate the house, disguised" won the poll, /log continued to be updated:

Let's go to the city!

A new Strawpoll was added to /log as Josh and Sara reached the city:

"Send Sara into the city" won the poll and Sara continued to give updates on /log:

Eventually, another Strawpoll was added, along with:

"Go to the city hall" won the poll.

/log updated with Sara venturing to the city hall:

A few minutes later, /log updated again with a new Strawpoll from "? ? ?":

The main page's background colour changed back to red.

"Tell Josh what happened" was the winner of the poll and /log updated to match this:

At the same time, the page title changed to be Hrcvvbr pa jlf Lpajgv ynnz feewhv ap ")!^_)$_)$. and a hidden comment was found by Ayakura in the HTML for the main page:

Crauss solved this to lead to this Strawpoll, a character poll which was won by ? ? ?.

The symbolic part of the title was solved by Discord users Crauss and Dr. Dino to be the date 2016-04-04, which when typed whilst holding shift produces ")!^_)$_)$. While the rest of the cipher remained unsolved, Crauss suspected that the full solution was Mystery of the Emblem will return on 2016-04-04.

On 2016-04-05, /u/mysteryoftheemblem posted this text post to /r/gamedetectives, explaining that the ARG would return the next day due to server issues.

"Attack the base another way" appeared to win the poll and after a couple of hours, /log updated with Josh's progress:

Discord user Crauss found the map Josh referred to at map.png. It displayed a map of the base with some encrypted labels: 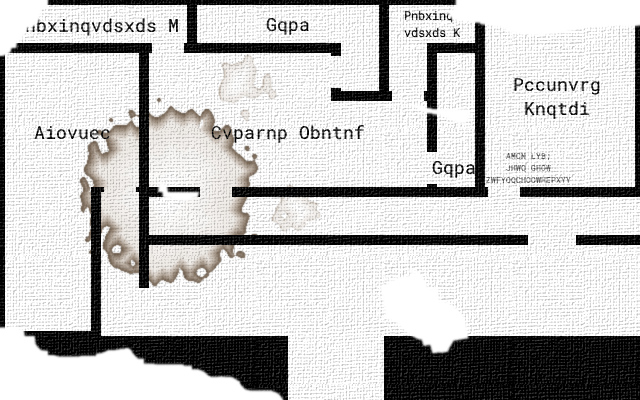 The first label is partially cut off by a tear while the last label may not be accurate due to its low resolution.

At some point, the following was added to the bottom of /log, all Strawpolls on the page were changed from embeds to links, and a large amount of /log entries were moved to another page:

Later on, /log updated again with a Strawpoll to decide which way to go:

"Go to the right room" won the Strawpoll.

On 2016-04-07, the page title changed to "this reminds me of my old mate blaise de... wait, what was his surname?", implying that the map used a Vigenere cipher. /log updated with Josh's progression to the room:

Discord user Crauss noticed the misplaced numbers and suggested that the code was either 8925 or 9136.

/u/whizzer0 then posted this thread to /r/gamedetectives, revealing themself as the creator of the ARG and detailing information about it.

A sequel/successor to the ARG was later confirmed to be in development, featuring the return of Yukimura and Josh, plus many new characters.